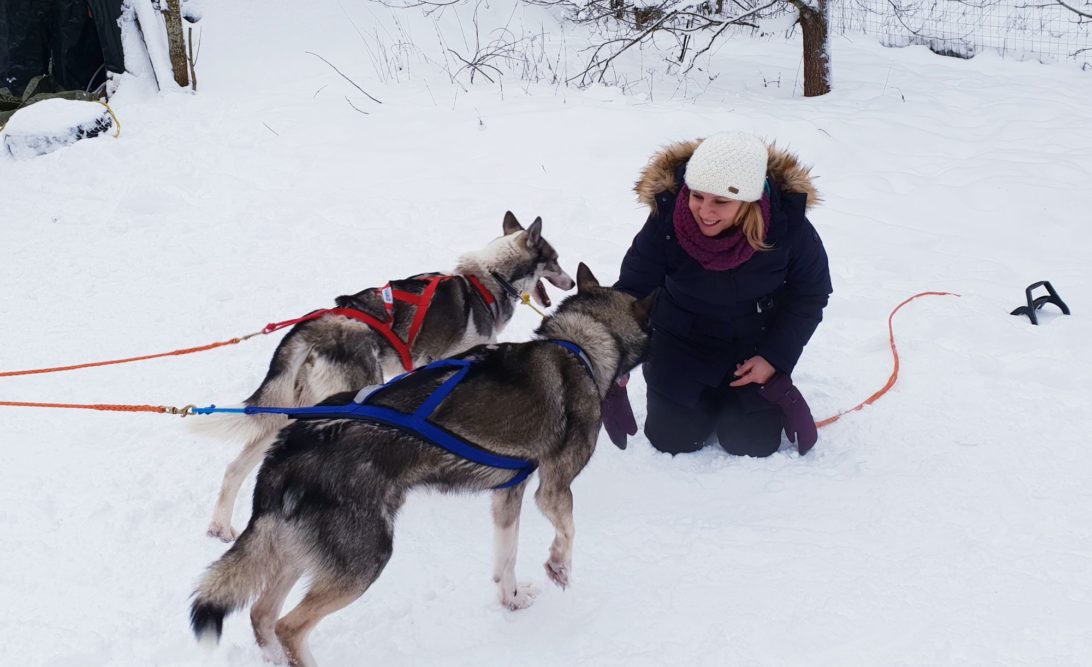 When I started to plan our trip to Finland for the end of January, I had a picture in my head:  a white snowy landscape until the eyes can see, we are sitting in a big sled that is hauled by beautiful and strong huskies…

Quickly I started to look into dog sledding opportunities around Tampere, in the south of Finland (there are usually more such programs in the north, in Lapland).

When I found Gegwen Getaways offering husky sledding just a few kilometers out of Tampere, I got overly ecstatic and overjoyed. I opened my e-mail immediately to set a date with the owner. Once the confirmation came, I acted out like a 4-year-old child, screaming and jumping in the middle of the living room while crowing with joy. 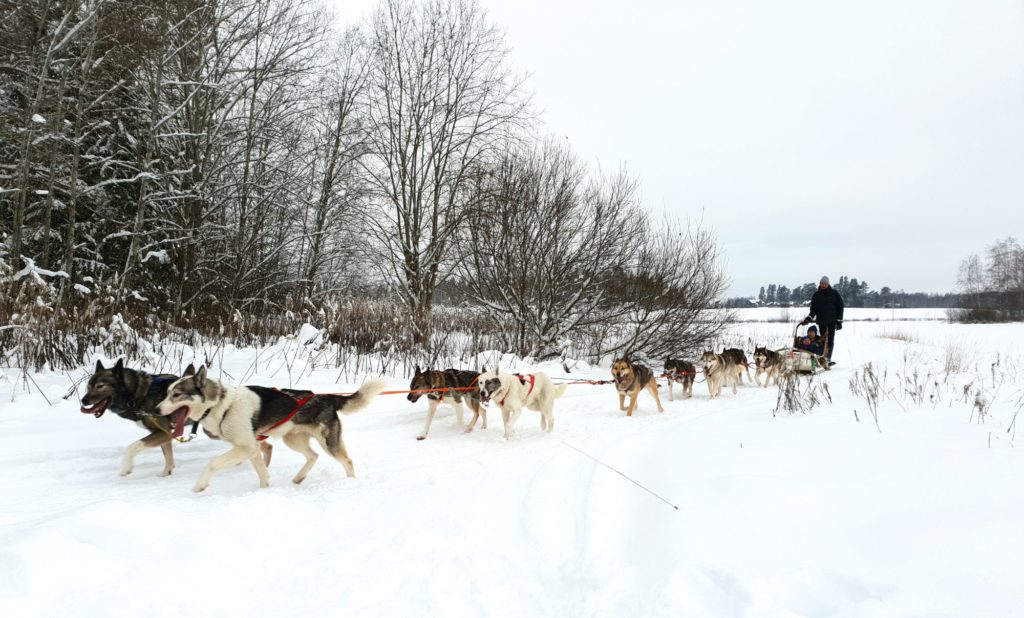 A few words about Gegwen Getaways

The owner is an extremely sympathetic, tall, bloody Finnish man, Erkki. He told us that he had been working as a software engineer 30 years ago, but he started to get used to too much to the daily routine and felt that he needed some change that can give him a lot more freedom. So he decided to leave the office environment for a year. Well, he only thought he’d be away for only a year. As he was a dog-lover already back then, he bought 2 Siberian huskies for his exciting outdoor activities. But two dogs were not enough for him so they soon became a group of 4. Then they multiplied. Finally, Erkki decided to stay away from the office job and got into a rather free, entertaining, friendly, interesting and lovable business.

During the winter season (if weather and snow conditions are good enough) he is offering his services in the south, and in summer he takes off with his dogs to Lapland, so these lovely creatures that require a great room to move, can run all year round. And of course, these four-legged fury animals simply love it! At the moment, Erkki has only 11 huskies (there were 12 at the time of our visit, unfortunately one of them passed away since then), but in the past there were times when he had even 30 fury friends. 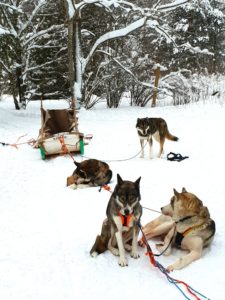 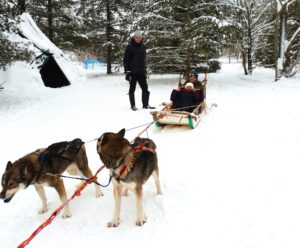 Location and how to get there

Gegwen Getaways’ lies about 160 km north of the Finnish capital Helsinki, and only 30 km south of Tampere.

If you want to get to the site privately with public transport, you have to target the city of Lempäälä. There are direct train connections from Helsinki (1.5 hours) and Tampere (10-18 minutes). Indeed, even from Turku!

From Tempere there are 2 types of trains:

Theoretically, the commuter train ticket cannot be used on a high-speed train. But we tried anyways because we didn’t want to freeze for 20 minutes in the cold. So we asked the conductor if it would be maybe somehow possible. His reaction was funny, he rolled his eyes but he let us on. And he added: this is for the first and last time. Well, after all, we were fine, we didn’t plan more train rides on this trip anyways 🙂

From Lempäälä you can take a taxi to the destination. There are always a few cabs waiting around the station. The route to Gegwen Getaways is approx. 8 km and it costs around € 20 one-way.

When the taxi turned from the main road into Saarikunnantie way, I got so excited like in my childhood when we were walking home from church at Christmas Eve and I was wondering if little Jesus (in our tradition little Jesus brings us the Christmas presents) has visited our home already and dropped the gifts under the Christmas tree. Everything around us was white. The snowy road, the fields, the rooftops of houses, the trees, but even the sky, because they were covered with dense snow clouds. The sight was very surreal. 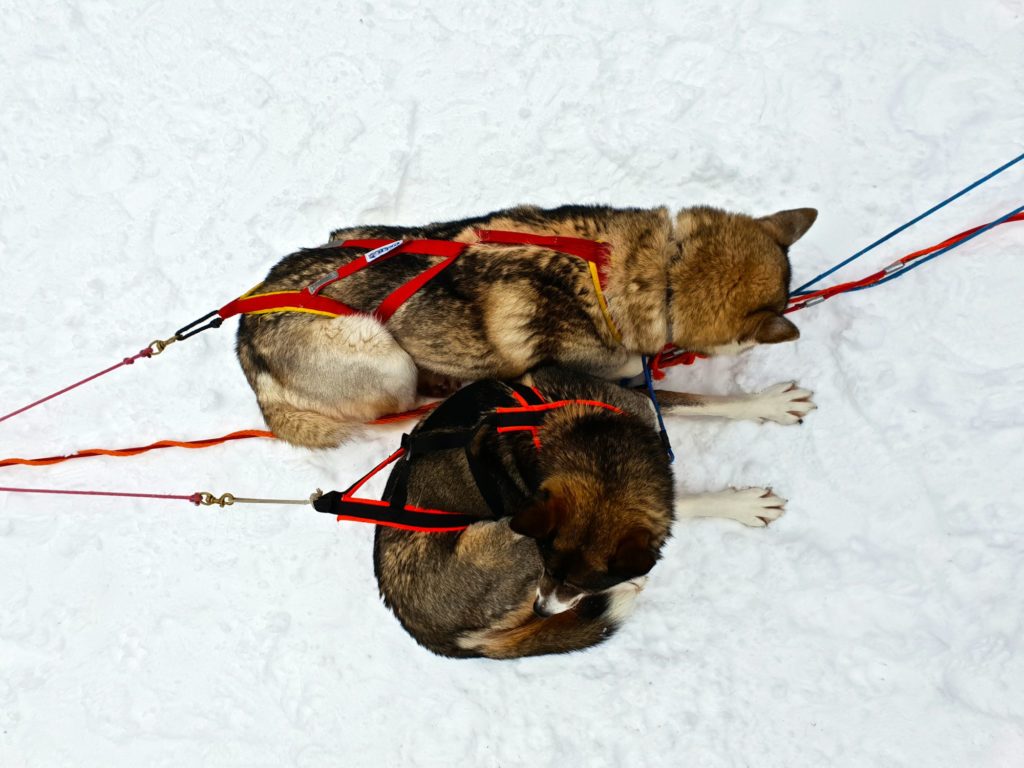 We got out of the cab a little after half past two in the afternoon, not long after a group of 7 from Manchester has arrived, very nice people that we’ve spent our afternoon with. A few minutes later, the owner, Erkki, greeted us and invited us to the yard, where some huskies were running around freely, some were already tied to the sled and waiting for the ride, and the rest was excitedly waiting to finally get in line for the sled.

All together 9 huskies were teamed up for us and as they stood side by side and behind each other, they could be perfectly observed. It was incredible to watch them and their varied  personalities. Each and one of them was different.

In front, the two dogs looked as if they had thrown in a few ecstasies. They jumped franticly, played with each other, and it looked like they try to show who is stronger. They were super excited knowing that soon they can run. 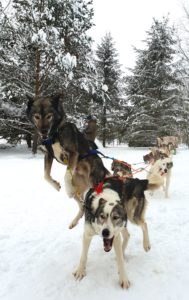 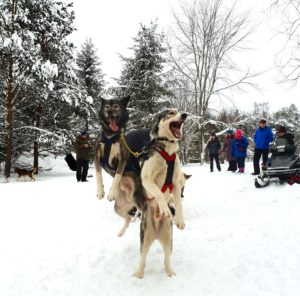 Behind them were mother and son. The pup was a little shy, he didn’t want to make friends with us. Erkki let him run free after the we finished sledding so he could get to know the strangers freely at his own pace. He came up to us, smelled us, then jumped away again. He played this game of his for hours.

In the middle, a brown fury one was running alone. He was super playful, throwing himself on his back for a small caress while resting.

At the back of the team 2 pairs of somewhat more relaxed huskies were waiting for the run, some of them relaxing, comfortably lying in the snow, sometimes showing their impatience with a wolf-like howl. 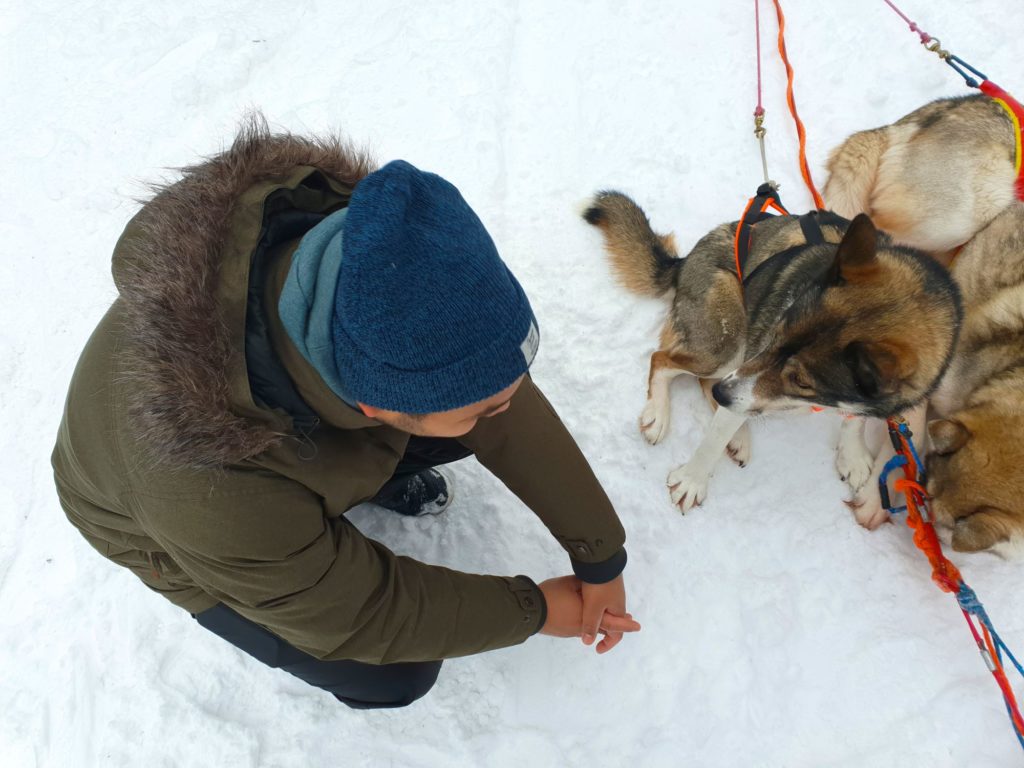 We were the first pair to sled that day. I was very pleased with this because the huskies were at the top of their power. They were amazingly energetic. The sled was fixed to a tree. When Erkki loosened us, the sled dispatched with such speed that we were pressed for a second to the back of it, just like when taking off in an airplane. We rushed through the snowy hillside and ran a big circle, about 1 km. The sledding itself didn’t last super long (well, obviously it’s hard to let go such a good feeling, we want to always get more of it), but the whole experience was fantastic and unforgettable! 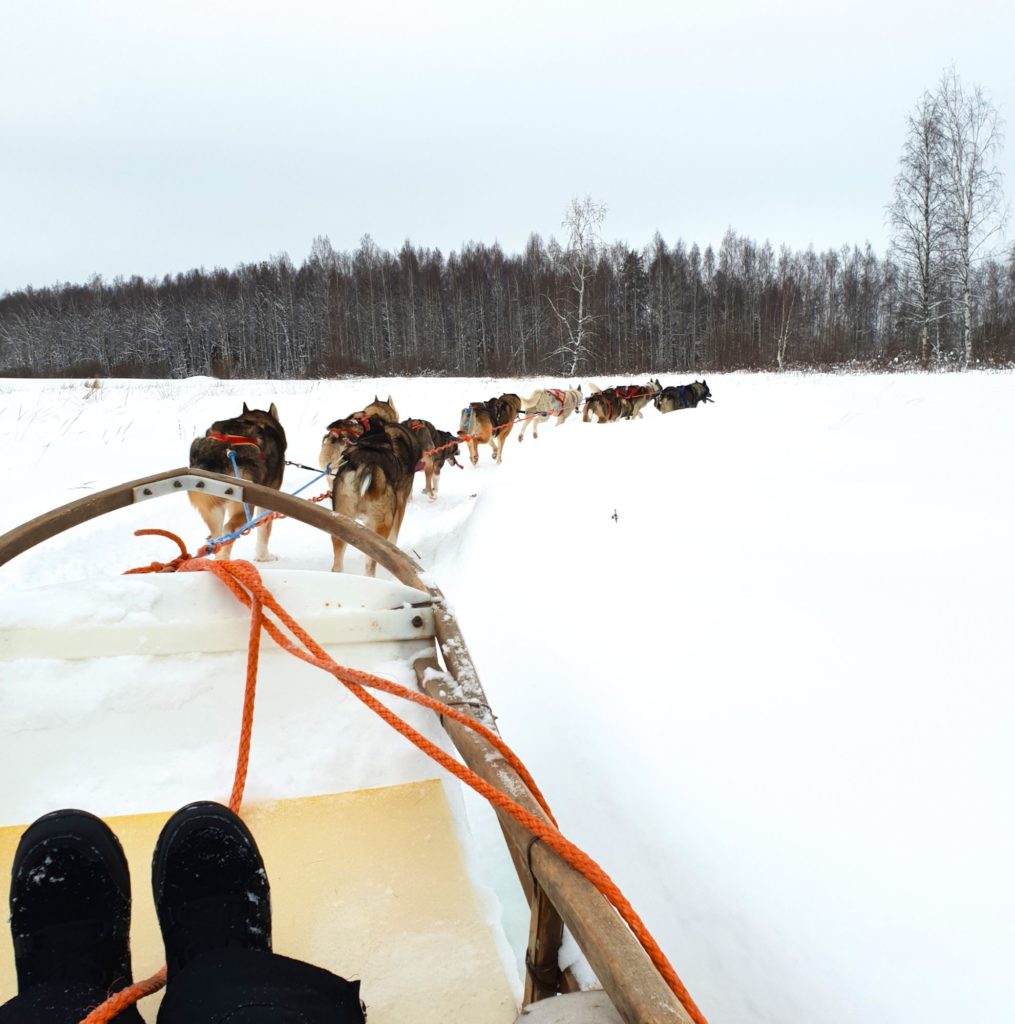 During the rides, the fire in the teepee was already in flames, and from there you could smell the sausages grilling over the fire. After everyone was finished with the sledding, we were offered by our host sausages, tea or coffee. While we were warming up inside the teepee we were sharing stories over the tasty snacks. All together we’ve spent about 3 hours on Erkki’s land with him and the other guests and our new, amazingly clever, strong, beautiful, funny, playful fury fiends. This afternoon will surely stay with us forever and we’ll think of it as one of the best! 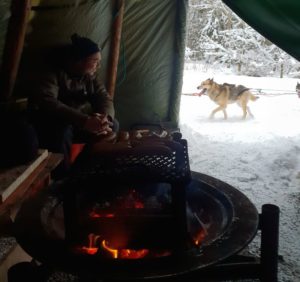 And here comes the ethical part of dog sledding

I had questions raised in my head about the whole dog sledding business. Whether the dogs can  bear the burden they have to deal with during sledding, and that in winter, sometimes in very cold and harsh weather conditions.

The Siberian husky comes from North-East Asia (some say from Alaska), so it is used to cold, extreme weather conditions. It is a terribly energetic and tough species that requires incredibly high activity on daily basis. So if they don’t pull sleds, they still need to run more than 10 km every day. There are some that can run over 100 km a day. And last but not least, they’ve been trained for this activity. 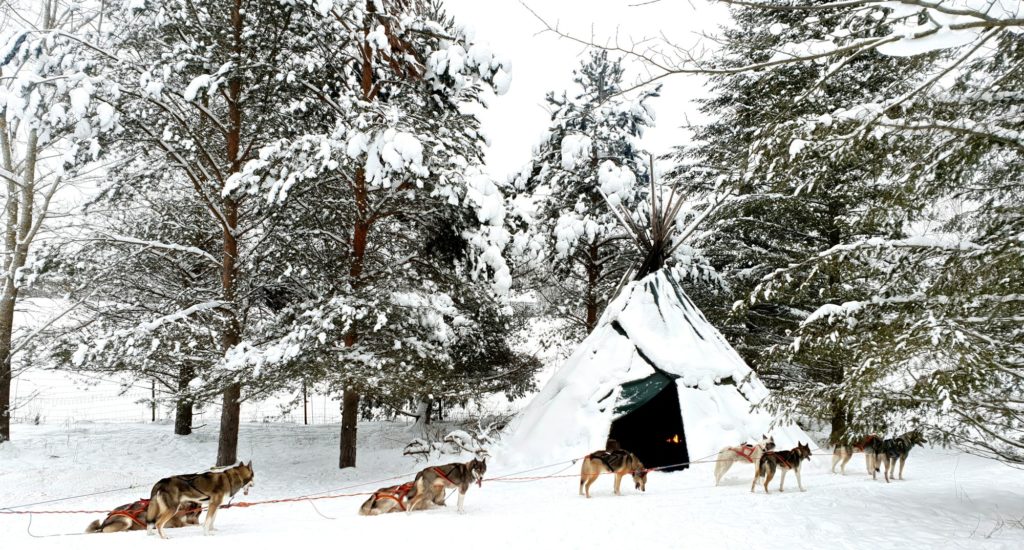 Erkki treats the huskies super well, getting them the best of everything, including food, attention and love. It is obvious that the dogs are happy, healthy and it’s so visible that they enjoy what they’re doing. That’s why I dare to recommend Gegwen Getaways! 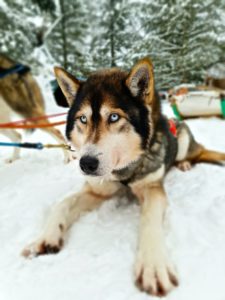 If needed, Erkki is able to organize a husky safari in Lapland too, thanks to his great contacts. In the summertime he also travels to the north with his dogs, so if you are lucky he can be your guide up there 🙂

One Reply to “Dog sledding in southern Finland – Gegwen Getaways”