India – Around the Golden Triangle on a train 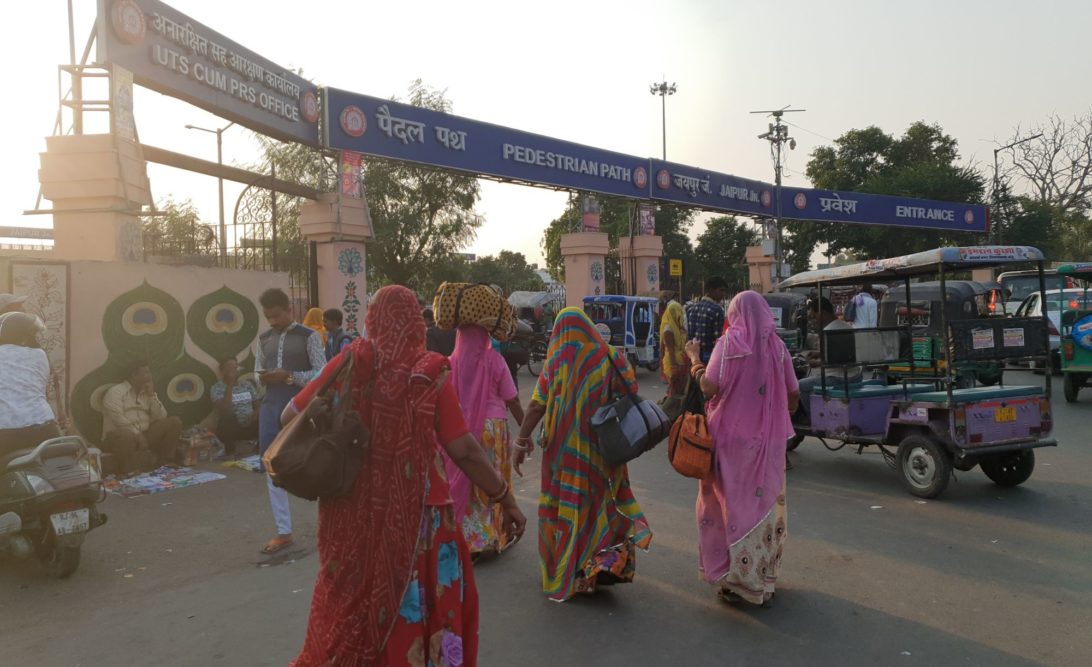 In India you can find any form of transportation if not all of them – I dare to say this without exaggeration. From camel- and horse riding, bicycles and rickshaws to buses, trains, airplanes. Everything. And of course traveling on the top of minibuses and trucks or hanging on the side of the trains.

Now, however, I would like to focus only on the famous and not always flagrant Indian railroad system, maybe my tips and experiences can be useful to someone. Especially people who plan their trip somewhat ahead of time. Unfortunately (or rather, fortunately) I have no first-hand experience of the fierce battles for tickets purchased at railway stations.

For some routes, particularly the ones popular with tourists, it is worth buying your tickets in advance. Specially if you’d like to enjoy your ride in a familiar way as you are used to and you do not necessarily want to travel in the well-known Indian style – compressed. 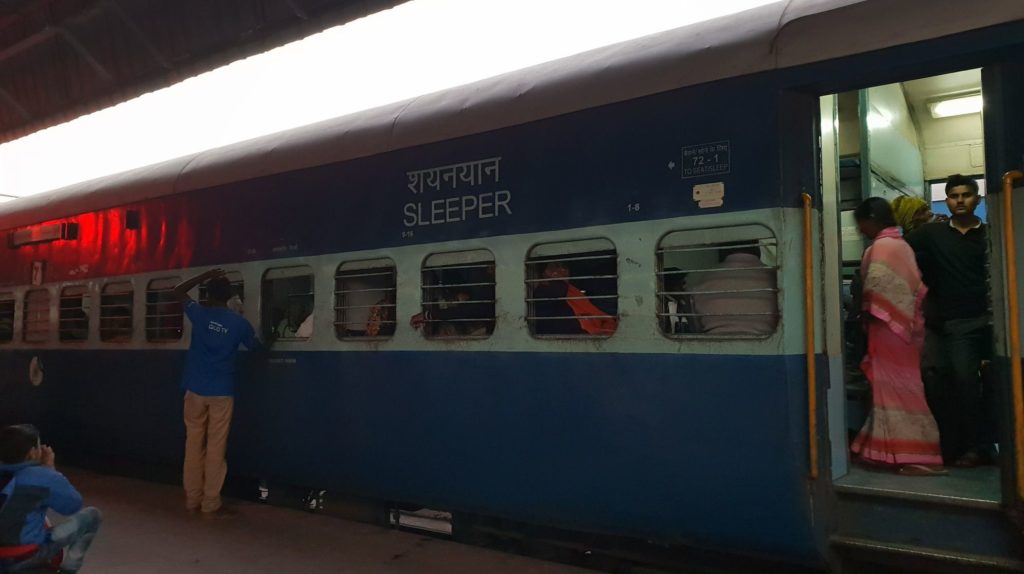 Theoretically, the possibility of buying electronic tickets has already been introduced on the official website of the Indian Railways (https://www.irctc.co.in/nget/train-search), practically, however, if you don’t have an Indian phone number, don’t even waste your time because the booking doesn’t work for some reason. Registration can be done by a foreign phone number. Even the registration fee can be paid (about 2,2 EUR), which of course will be charged to your bank account. But after that every single attempt purchasing a ticket fails, there is always an error message.

After I was charged the fee and the system didn’t work, I started to look up other solutions and I found an Indian guy with very good references, who – of course, in exchange for a certain commission – arranges online tickets. That’s basically his job. Because I didn’t have too much time and my frustration had erupted into the skies because of the inoperable system of IRCTC (but at least I got a little preview of how things in India work), I thought, come hell or high water, I’ll give it a try, write to Raj (that’s his name), I pay and I will see…

And tadaaaam, everything went smoothly, from my request to using the services. That’s why I dare to recommend Raj:

Also do not hesitate to contact him if you are looking for a driver, he can arrange English-speaking car and bus chauffeurs, or even guides in several cities.

As in many other countries, there is a security check to go through to get to the tracks. If we want to reach our ride it is not worthwhile getting to the train station at the last minute. And guess what? There is even a possibility that the train is being on time! Indeed, this happened to me twice: arrived on time and left to the next destination punctually.

Information at the stations

What very pleasantly surprised me was the information that was plainly, visibly and colorfully displayed, illuminating in a kind of “old” Indian way everywhere at the station. Seriously, many railway companies could learn from them (including the Hungarian).

When I entered the railway station in Jaipur, in front of the main building a huge display was looking down at me, colorful letters flashing on it, signaling the arrival and departure times of trains and other information. 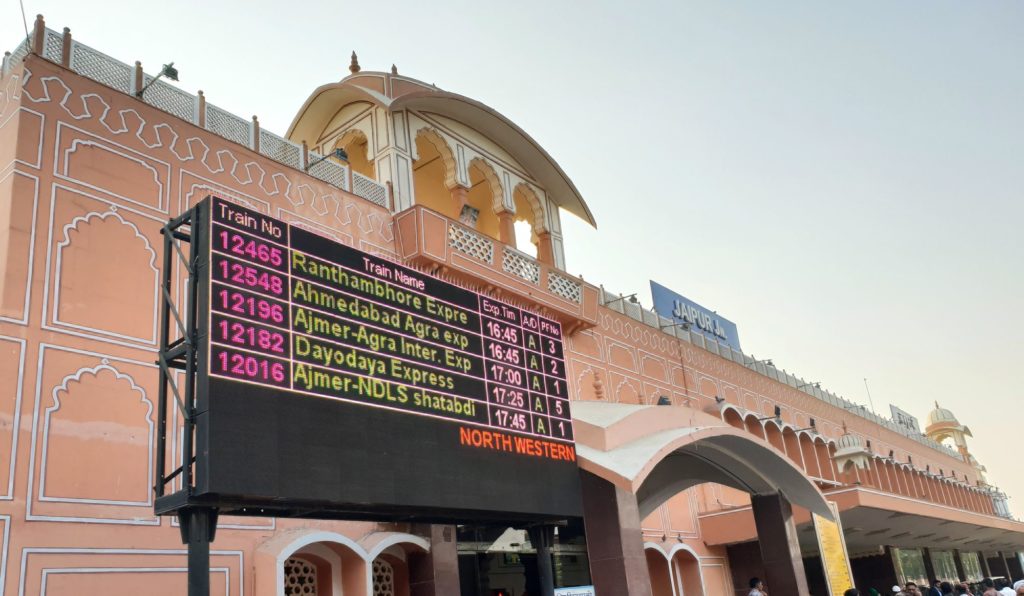 The same monitors were placed inside the building and between the tracks too. The situation was identical in Agra and Delhi as well. 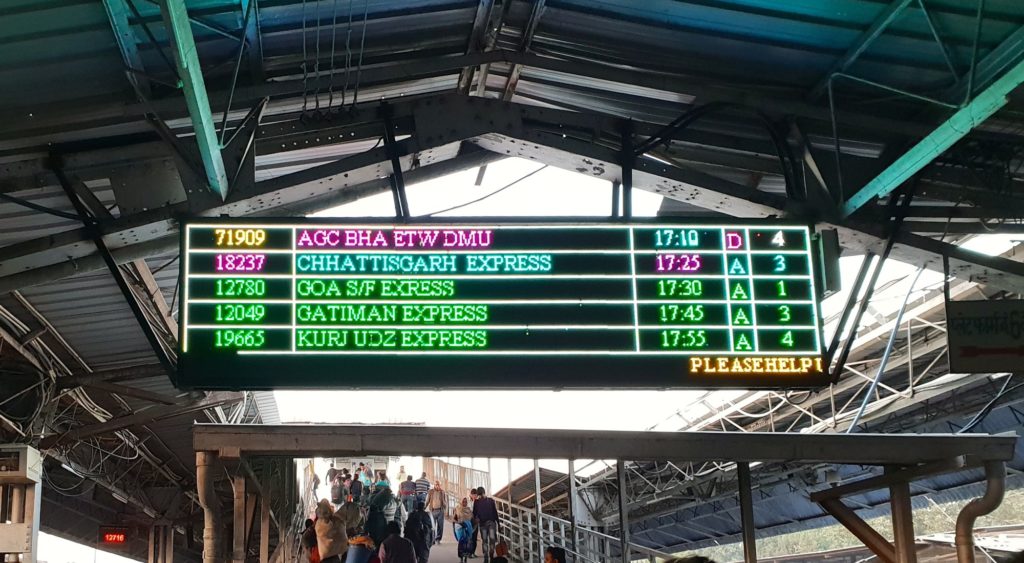 The screens communicate the following:

Based on the above it’s really easy to get around in an otherwise chaotic environment.

• Numbers for the wagons

I was standing next to the rails in Jaipur to finally sight the AF Intercity train (towards Agra) arrive on track 1 in a very dramatic way, pounding and hacking loudly. When I saw the outline of the locomotive in the distance I was super happy because it meant that the train is arriving on time. Then it passed in front of me and was just running, pounding, one car after the other. I thought it would never end. In my whole life I haven’t seen so many wagons tied to each other moving in one direction, towards the same destination. 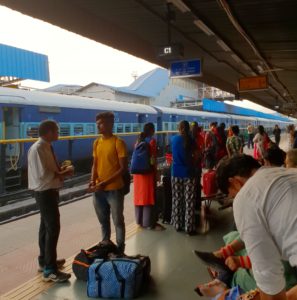 When I was a kid and we were traveling by car somewhere, I was always happy to see the railway gate being closed. With my dad we counted the wagons. I loved when I saw a cargo train approaching from the distance because I knew it would take some time to count the carts.

In case of the AF Intercity passenger train, these childhood memories came flooding back. It was brutally long. That’s why I find it incredibly useful to have small screens hanging from the ceiling at the rails, displaying the number of the cart that will stop at that particular spot. So, if you have a seat reservation, you don’t have to go crazy looking for your wagon with hundreds of other people. 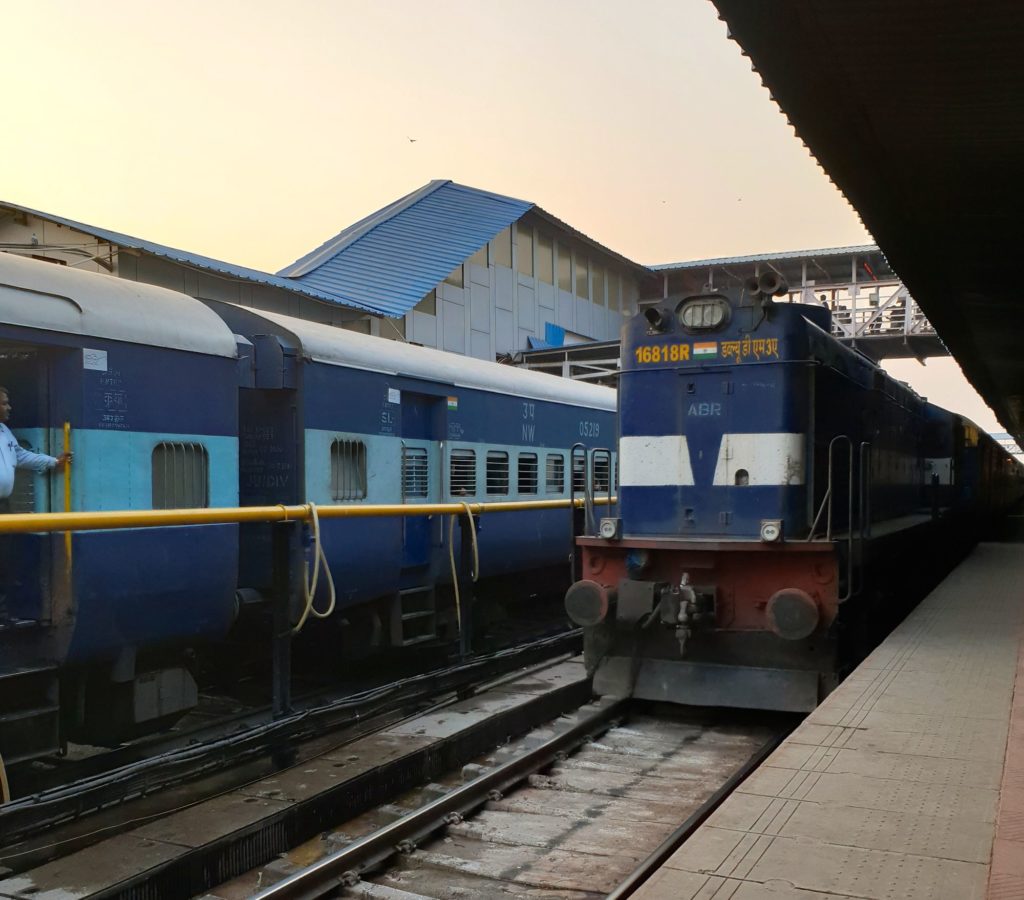 The traveling public at the railway stations in India is incredibly diverse. At the train stations of the Golden Triangle (Delhi, Agra, Jaipur) there are many tourists among the wealthier locals and the less fortunate ones. The ticket price for those who want to travel or are forced to depends on the level of comfort and thickness of one’s wallet.

Here I don’t want to go into details of the types of carriages, I might write another post about it. Just to say, I was traveling in an AC Chair Class (CC), an air-conditioned open cart and I was completely satisfied with the service. The seat was wide, and could be tilted back, basically there was more space than on an airplane. The AC was working and it was possible to charge electronic devices near the window in every row. I had the opportunity to travel in a completely satisfactory environment for a couple of hours. Maybe next time I’ll try a different class, who knows… 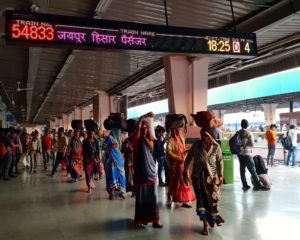 For me using the service of the Indian railway was a very positive and memorable event. There is this specific Indian train picture in everyones head: hundreds of people clinging and hanging on the side of trains, sitting on the top of them or even at the front of the locomotives and almost nothing is visible from the trains. Well, I haven’t seen anything like that. However, it was exciting, interesting and often heartbreaking to watch the busy everyday life of the stations. 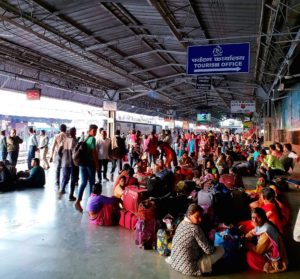 There are many different stories happening in front of one’s eyes. Hopping on a moving train is probably a sport practiced at train stations. The more amateurish version of this is hanging out from the door of the moving train.

The train doesn’t even stop yet, passengers are already pushing through the door to have a better seat, in most cases though a life-and-death battle is going on for a more “comfortable” standing spot.

The food seller is running next to the train to sell something to the passengers last minute and make some extra cash, even when the train is in motion already.

On the ground locals, dressed in colorful traditional attire, are sitting in groups, some of them fall asleep.

Next to me a family is having a conversation in perfect English but with a very strong Indian accent – the lady has an LV purse hanging on her shoulder, her son looks like he is a fan of Gucci.

A young barefoot girl with a dirty face and hands, wearing worn out unclean clothes appears from behind them. Judging from her tiny figure and the soft lines of her face she is only around 17-18 years old. An infant in her arm, a 3-year-old toddler holding her hand.

Then I hear the announcement from the speakers that the Gatiman Express towards Delhi will depart from track 4 instead of 3.  I stand up and walk over to the opposite pair of rails, I get on the air-conditioned wagon, take my comfortable seat, put my my phone charging and head towards my next destination.

I’ve already written about my experiences and overall thoughts about India as well as about sole female travel in this country.