Nagarkot – the sight of the Himalayas near the Nepalese capital 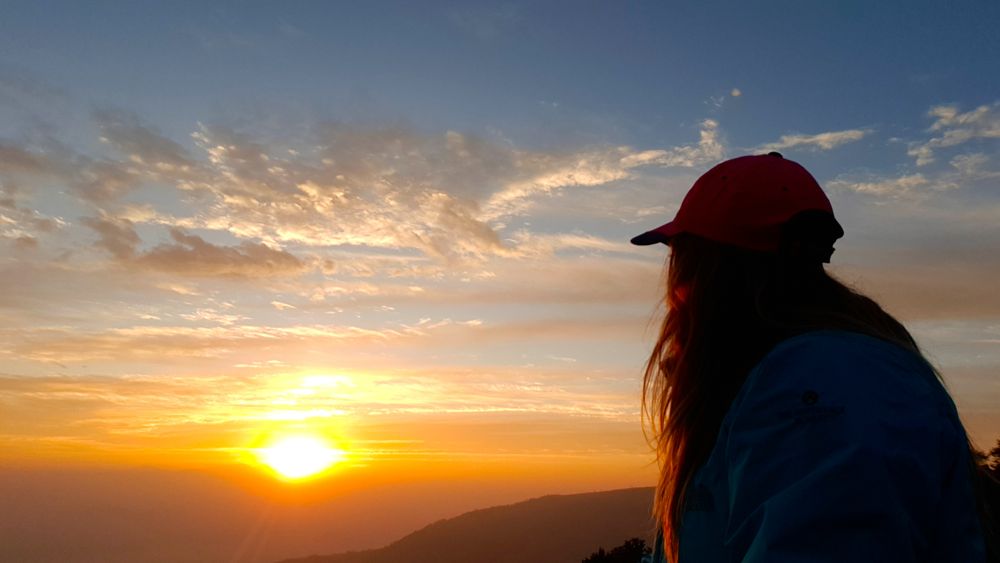 Near Kathmandu in a small mountain village called Nagarkot, there are a number of hotels with rooftop terraces from where we can admire the majestic mountain range that is known to everyone in the world: the Himalayas.

Most tourists who visit Nepal hit the wonderful hiking trails and aim to conquer one of Nepal’s mountain peaks. Many people set off on the adventure for religious and/or spiritual reasons. This tiny country just between India and China is home for the hiking trail that leads to the base camp of Mt. Everest. I’m sure that I’ll go back one day to the land of natural wonders and incredibly nice people, just to hike THE one.

Unfortunately because of lack of time I did not have the opportunity to go hiking during my short stay in Nepal, as I only visited my girlfriend and her family for a few days in the capital, Kathmandu, where I flew over from India. Then I thought to myself: if my destiny brought me here, let me just have a quick glimpse of the snow-covered Himalayas at least once, even if from far far away, and see the Mt Everest, the highest peak on Mother Earth.

If we really don’t have too much time, let’s say e only have a day, then it makes sense to go up to Nagarkot (this is the closest lookout point from Kathmandu, where the Himalayas can be seen from), book an accommodation with a magnificent view from its terrace and trust that at the dawn when the first rays of the sun begin to dance on the sky, there will be a nice and clear sky (well, there is a bit of luck needed).

How to get from Kathmandu to Nagarkot

There are several ways to get to this charming little village that lays at 2175 meters, only 32 km from Kathmandu. Depending on how thick our wallet is and what kind of adventure we’d like to experience, we can chose from several options.

There is no direct line between Kathmandu and Nagarkot, you have to go first to Bahktapur. This beautiful historic small town is just 15 km away from the bustling, smoky capital, and only 16.5 km away from Nagarkot.

To Bhaktapur we get from the Ratna Park bus station in Kathmandu for a few cents. The Kathmandu-Bakhtapur and Bakhtapur-Nagarkot buses do not have the same stations in Bakhtaput, the two stops are a short walk away from each other. If we go around the lake, it can be quite a pleasant short walk, especially if we are changing buses… Don’t underestimate the times spent travelling from town to town…

From the capital we took a taxi to Bakhtapur because my Nepalese friend (who has been living in the USA for 17 years now) didn’t want to use local public transport. Also we were short on time because her sister, who lives in Bakhtapur, was taking us around the beautiful historic town. She took us to many superb places (I’ll write about it later), but it was surprising that as a local she didn’t know exactly where the bus stop was (it would be an exaggeration to call it bus station).

The main bus stop for a foreigner can be only recognized by the many buses waiting for the passengers – that are many. Since we didn’t arrive to the scene quite on time, all the seats on the “vehicle” were taken. But I thought it was not a big deal, not at all, it will be as easy as pie to stand through that 16.5 km. That’s what I thought. But this idyllic picture was very far from reality. I got a standing spot at the back of the pink bus – based on my time or arrival. And the bus was already full at departure, 90% of the passengers were locals and the rest were crazy tourist like myself.

We departed. Already at that point it was strange that the bus was – to put it mildly – leaning to its left. I couldn’t decide if this phenomenon was due to the road conditions or a “minor” technical problem. In any case, none of the versions was more reassuring than the other, and at this point we were only driving on a mild ascent that was almost straight. But even then, I clung to the hat holder as if I was hanging over a cleft and I knew if I let go, I would fall into the depths. A panic-like feeling took over my mind. I’ve played perhaps all the possible variations of our roll-over in my brain.

After a few kilometers, the road began to disappear in front of us, both in width and surface (back in the days it must have been a concrete road, because there were visible traces of asphalt here – this resulted in a more intense rumbling through these abandoned road sections. The bus was juggling so intensely that at one occasion I bumped my head in the ceiling – and I’m not tall at all). In addition, we have reached the steep part full of serpentines, where 2 vehicles in some parts only fit one next to the other if one of them stopped on the side while the other bus passed by. And in the curves the drivers of the vehicles were honking, indicating their arrival. And of course there are no road barriers next to the cliffs, I have not seen even one. 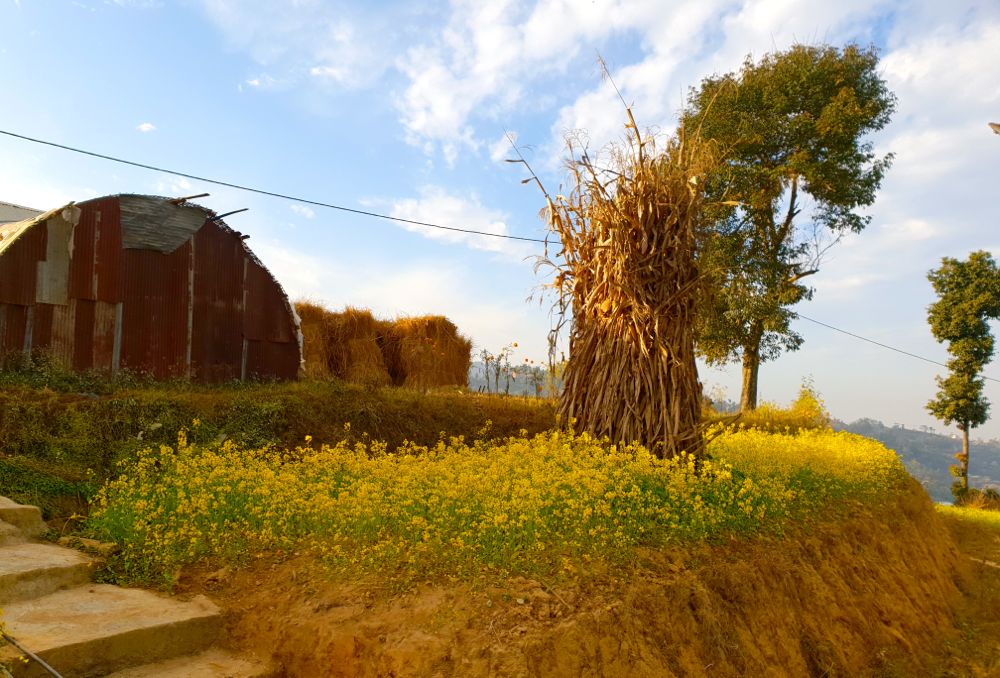 Well, here my panic got stronger and I started to sweat like a squirrel in the primeval forest (thanks to this freakish analogy to my favorite geography teacher). Then new images crossed my mind: that the bus is falling over to the precipice and we all stay there. I’m not exaggerating when I say that I had a fear of death, on a level I’ve never experienced before. A Dutch girl standing next to me was totally chilled, trying to reassure me that there is no need to panic, this is all okay, there are hundreds of times worse roads in Nepal and she has already traveled by local public transport some of them. It took me about 40 minutes to get used to the wild ride, but I didn’t let go of the hat-rack. After the “flighty” 1 hour 10 minute (yes, that was the timing for 16,5 km) journey, I got off the bus with my fingers totally stiff and the next day I had muscle fever in my arms.

Going back from Nagarkot in the morning at about 7 o’clock, there were plenty of empty seats, but on the way we were joined by schoolchildren, workers, and those who were transporting their home-grown rice in bags for sale to town. By the time we got to Bakhtapur, the vehicle was full of passengers. 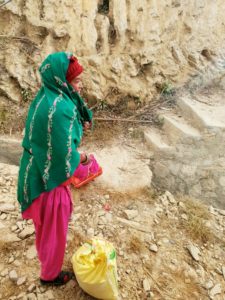 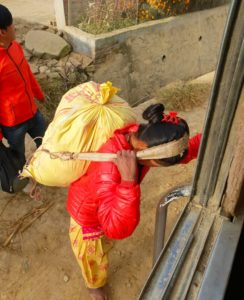 In Bhaktapur, I ran from the final station to the other stop, jumped on the bus to Kathmandu and “soon” I was back in the capital again.

And how did I know which bus to take? Simple: I asked the locals! But it is also a solution if one learns to read the local language. Although it was “nicely” written on our but to Nagarkot that Wel ComE it still does not hint about the direction 🙂

So if anyone wants to take the local bus in Nepal, should have the above in mind. Maybe if I knew what to expect while on the road, I’d rather pay for the taxi. But afterwards I’m happy that I took this path, after all I survived.

Buses run between Bhaktapur and Nagarkot every 45 minutes between 5am and 5pm. The ticket price is 55 RS (0,45 EUR). You can also count with the same on the Bhaktapur-Kathmandu line.

From Kathmandu the taxi to Nagarkot costs about 50 USD. This price applies to one direction. The taxi can be taken from anywhere in the city center, the question is whether the driver is willing to take this short, but long-in-time journey (there is horrible traffic not only in the capital, but around the whole area, and the serpentines are not designed for fast driving either). Usually, however, $ 50 is pretty convincing though. Don’t forget, we’re in Asia, so don’t forget to bargain.

In addition to these two options above, you can also hire a private driver or rent a minibus, and you can pay for an organized trip that is usually linked to a shorter tour or sightseeing (such as a Bat Cave or hiking in the area). Unfortunately I have no personal experience with these.

The view of the Himalayas and the Mt. Everest in the distance

Nagarkot is a small town that is specifically designed for tourists, offering plenty of accommodation, and grocery stores and restaurants are open until late at night. 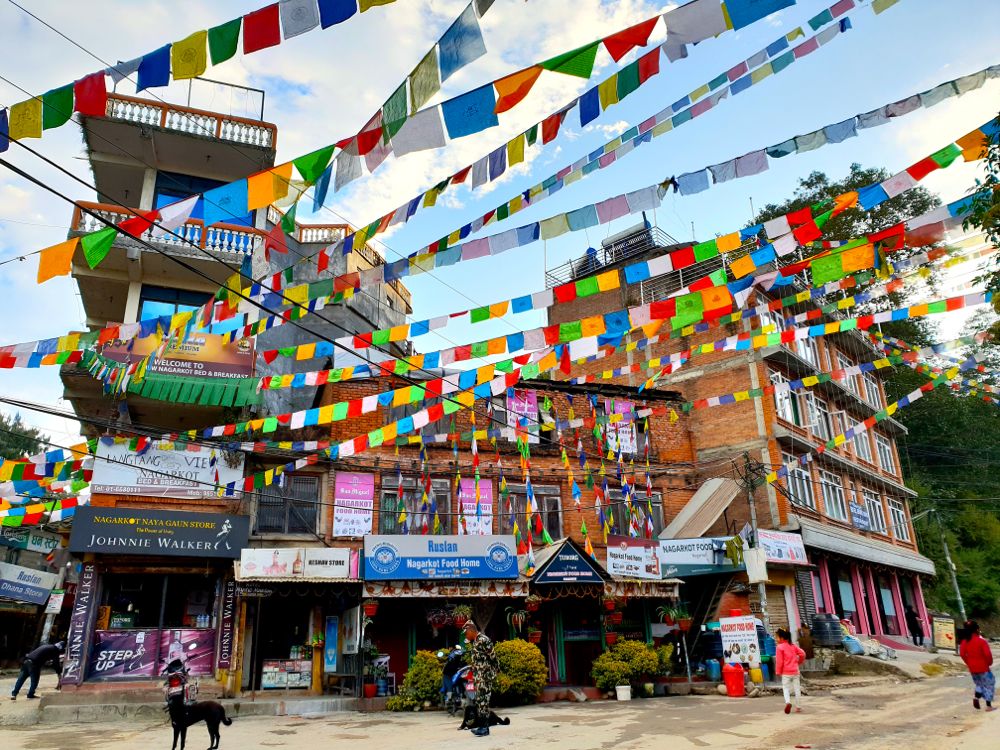 I’ve booked a room on booking.com last minute on the day of my departure from the capital at the Hotel Everest Window View. Of course, before that I made sure that the hotel has a rooftop terrace so I can watch the sunrise and see the mountain range in the far. What I did not expect was the lack of heating in the room. It would have been a good to have it, because the air can cool down quite a bit overnight, which can be unpleasant for those who don’t handle the cold too well. The staff was very nice though and I got a big, warm cover that worked well as a good warm-up on the terrace at dawn.

I was wondering about the weather in the morning, because I had only one chance to see the highest peak of the Earth during this journey. I got up early to make sure I didn’t miss the sunrise. I walked over to the huge open terrace, sat down on a white plastic chair, wrapped the cover around myself and waited. The sky was cloudy, but that made the sunrise incredibly beautiful. The rays of the sun danced between the clouds, which, however, were gracious enough not to obstruct the Himalayas and its highest peaks completely.

Although the snow-capped sight of mountains and peaks did not appear to me as if the sky was clear, but I still had no hard feelings left in me, because I got what I suffered for during the one hour death race on the bus: the view of the Himalayas and Mt. everest together with a breathtaking sunrise. I felt such peace in my soul that I could wake up close to “the top of the world” and the weather was quite gracious to me to have an experience that, frankly, I might not have thought of before. I always say that God works in mysterious ways… When I started my trip to India I wouldn’t have thought that another destination would be added to my bucket list: the Mount Everest Base Camp.