Riviera Maya by car – the magic of freedom 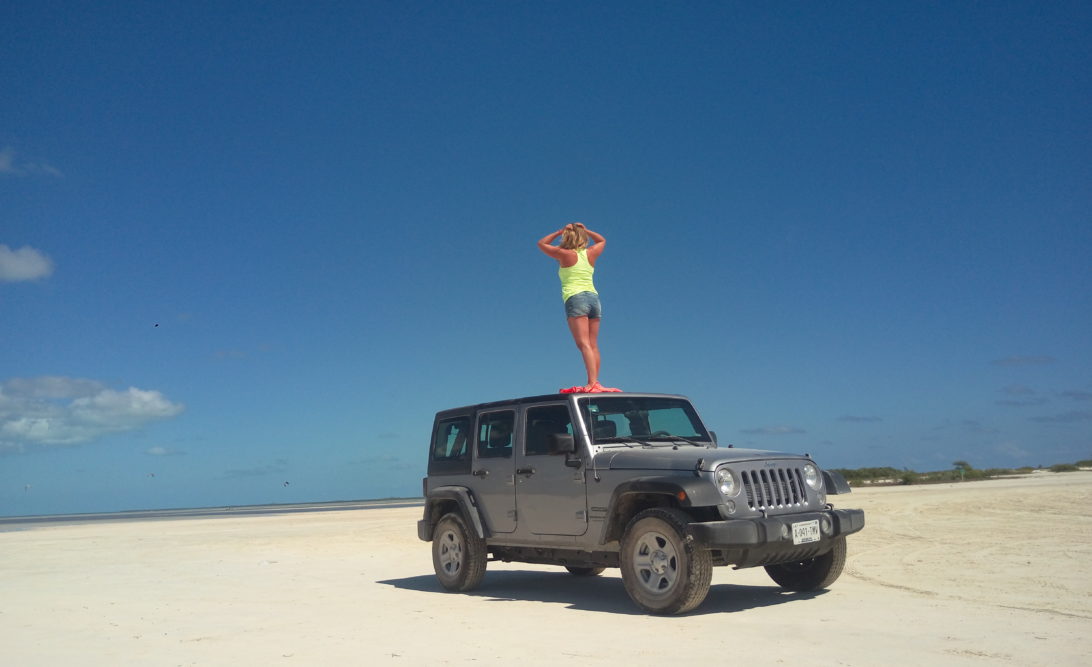 There are 4 + 1 girlfriends, one living in Miami. +1 has been begging for a year and a half to visit her in Florida. Okay, okay, we thought, but if we’ll travel such distance from Eastern Europe, it would be worth to take at least 2 to 2.5 weeks off. But that might be too much only for Miami. Anad well, very expensive too.

We first picked out Cuba for our little girly getaway, but after long investigations and phone calls we decided that we won’t play the Russian roulette and risk the entry back to USA (yes, unfortunately it is a possibility), so we went for Mexico.

The Maya Riviera seemed to be a perfect choice for many reasons: there are plenty of cultural sights and the beauty of the natural resources is endless too.

We definitely knew that we did not want to stay in luxury hotels at horror rates, then be part of organised, time-bound programs. So we gathered all the information on how simple and secure it would be to rent a car and drive around the riviera and surroundings. As a driver I was terribly afraid of what would be waiting for us, but there were 3 enthusiastic supporters alongside me, so I took the challenge. Later, there was another hero between us, so at the end I didn’t have to drive alone for 10 days.

I’ve never been attracted (so far) to an all inclusive trip nor staying at one single place for a longer time and hanging by the pool or laying for hours on the beach. Don’t misunderstand me, I love water and the sea, and I’ve been a real water-chicken ever since my childhood. I just cannot lay around and scorch on the sun for a longer time. The Riviera Maya is perhaps one of the destinations from Europe where one usually travels through a travel agency to spend days in expensive hotels on the beach. I would like to show now and maybe even convince some people that it can be done differently. It’s just a matter of a little organisation.

I’ve collected a few points to show you why it’s worth traveling to the Riviera Maya individually:

For me this is always an important aspect everywhere, because I really like places with less tourists. I want to highlight 3 places where we went:

Approximately 20 to 25 km from Cancun (depending on where we start), in the middle of a ness extending to the Gulf of Mexico lays Playa Isla Blanca. There are no constructed roads, only dirt roads, therefor it takes about 40 minutes to get there. In the middle of nowhere there is a bar though and a few sun-beds to rent. Except from a few local Mexicans the beach was almost empty. The isle flourishes in its natural beauty, it’s not built out, there are only a few construction on the beginning of it. For those who love separated places and maybe would like to try kitesurfing, i definitely recommend a visit: one side of the ness is white-sanded beach with turquoise water, the other side is the perfect spot for those who love kitesurfing.

In the bar they serve a divine Piña Loca. If you don’t know what it is, I’ll show you (I did not know either):

Basically the inside of the pineapple is cleaned out. Ice cubes and white rum is mixes in it with some pineapple flesh. Voila! All this cost us 80 pesos (around 4 EUR) and it was enough for the 4 of us for the whole day 🙂

this biosphere reserve south of Tulum was a popular and recognised coastal area by the original Mayan inhabitants, thanks to its exceptional natural beauty. They called it the “Earth of Heaven”. It is part of the UNESCO Wolrd Heritage today. You can find more detailed information about Sian Ka’an here.

The place is caressed by the waves of the sea from one side: 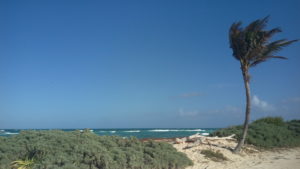 On the other side there is a calm bay:

Only a small boat carrying some tourists “disturbed” our rest here; we had a good chat with the locals while they were waiting for their passengers.

After climbing the pyramid in Coba, we thought that it would be good idea to cool off in a cenote. We chose Tankach-Cha denote for our swim. On the way to the cenote, on the left side of the road, we saw a sign for a small Mayan village. We did not really have to think twice about visiting it. We parked, got out of the car and were immediately greeted. First a playful dog ran towards us , then the man of the village came to welcome us. The gentleman was super king and cheerful and was excited to take us around the village and tell us stories. 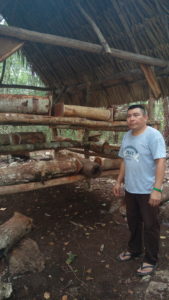 We first went through the garden where he explained what, how and what for they were growing, how excellent they were in making honey, how they used the agave plants to make tequila and ropes….

Offering us some freshly baked Mayan bread and some homemade dips, the man explained how the Mayans lived, worked, why they slept in hammocks, how their meals were prepared. 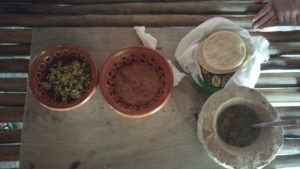 And he did all of this free of charge without any expectation. Of course, we were not ungrateful for his service though, and in addition I got a beautiful hand-made hammock made by the ladies of the village. It cost about 20 EUR which is a superb deal compared to other places.

Spanish language skills come in handy, as the man of the village only spoke Spanish. The local ladies didn’t really seem to understand even the official language of Mexico. Of course if one is great in activity, will have no problems at all in communication. Fortunately one of our friends in the group is fluent in Spanish.

You don’t have to adapt to the schedules of the organised tours.

I like to visit also the sights that are visited by all the tourists, but I like to visit them in a time slot when there is less people. In Mexico Chichén Itzá was such a site. We went there early in the morning and because we were completely mobile (having the rental car), we had a pretty easy case. 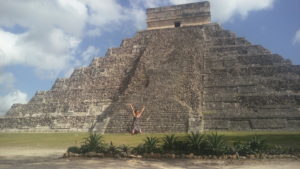 When we entered, there were only a few people walking around the most famous pyramid of the Mayans. We felt like having the place to ourselves. In a couple of hours, however, the crowded buses arrived from the seaside hotels and this miraculous place became almost completely unpalatable.

3) Cost-effective option in every aspect 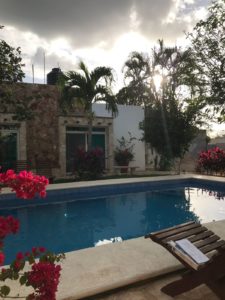 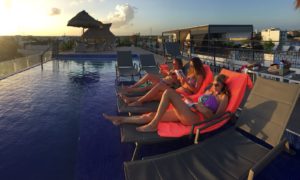 It’s not more difficult to drive on the Riviera Maya than on the roads of Eastern Europe.  There are, however, some things to consider:

Speeding: it’s simple – do not do it! In the best case scenario you’ll have to pay a high price for speeding, and there is a worse option too… perhaps no one wants to go to jail in Mexico. Not even for a couple of hours.

Speed bumps: the roads are full of them. Everywhere. And in many cases they are almost totally invisible.

Suicide candidates: well, there are those who run across roads (inside out outside of cities), even across the 3-lane expressways.

And last but not least, the Riviera Maya is safe! Nowadays we hear terrible news about Central America, including Mexico. Violent crimes, gang wars, kidnappings and executions are the happenings of everyday lives for many people in Mexico – all of these thanks to fights  between drug cartels. Mexico, however, is a massive country, the Riviera Maya and the popular Mexican seaside areas are absolutely safe. It was 4 of us on this amazing trip, all of us girls and we didn’t experience any atrocity during our 10 days in the magical Mexico!