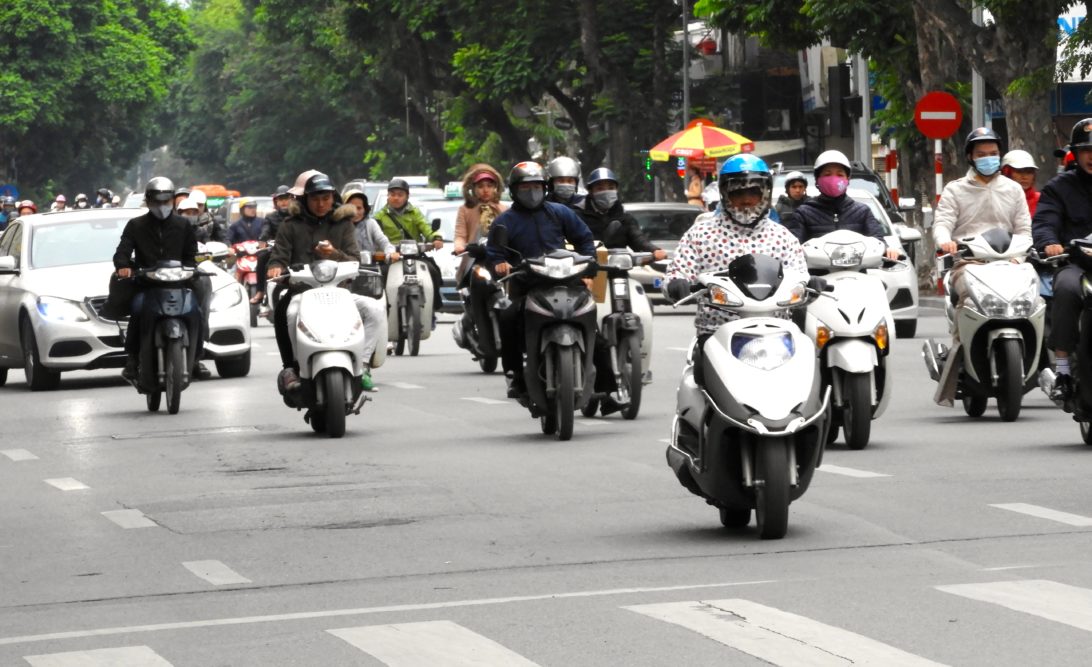 I feel I’m one of those lucky people that had the opportunity to try almost all forms of transport in Vietnam.

We went through the country from the South to the North: we traveled by plane, taxi, bus, train, bicycle and we even took a boat trip (although it was not part of public transportation). And of course the scooter… that is must-do in Vietnam for those who like some speedy adventure as it can be a bit frightening sometimes.

Up in the air

We landed on Air Asia’s scheduled flight in Ho Chi Minh City. Air Asia is essentially the Wizzair of the Far East with headquarters in Kuala Lumpur and therefor a lot of flights to various parts of the region, including Australia and New Zealand.

Since they are a low-cost airline, they work at very favorable rates and in the same time they are quite compliant. For example regarding luggage: one hand luggage can be carried on board (max size 56cm x 36cm x 23cm) plus a smaller bag. They charge for checked-in luggage though – prices vary depending on the destination. The current tariffs are available here: https://www.airasia.com/my/en/our-fares/fees-and-charges.page

Meal options are available on board at extra rates. Meals on the menu card look extremely tasty, representing different foods from the region. I picked Nasi Lemak (which is actually the national food of Malaysia) from the list and frankly, it did not disappoint at all. It was far better than the food that the big airlines are serving for “free”. Of course, however, it was a bit far from what  street vendors offer in downtown Kuala Lumpur, but it was still very tasty and delicious anyways. A warm meal like that costs about 3-4 EUR, which is still cheaper than what  Wizzair has available …

In Vietnam there is another low-cost airline, and this is Vietjet. We flew twice with them inland, once between Ho Chi Mihn and Da Nang and then between Hué and Hanoi. Both times the flights were punctual and the service was first class (I became very fond of the Vietnamese people, they are super nice, friendly and helpful!). There are 5-6 flights per day between different cities and tickets are available from about 30 USD (pay attention that online only the price of the ticket is shown without any fees and taxes – that is added to the price later in the process). Since it’s also a low-cost airline, you have to pay for checked baggage here too. And of course you can pay extra for many other services. Current fees can be found here: https://www.vietjetair.com/Sites/Web/en-US/NewsDetail/fee-and-charges/852/fee-and-charges 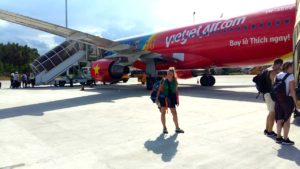 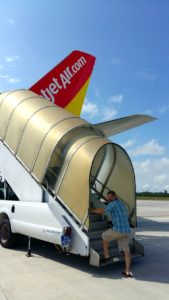 In the cabin a handbag (max size 56cm x 36cm x 23cm) plus a smaller bag can be carried with us and the total weight cannot cross 7 kg, but no one has ever cared about the weight.

I 100% recommend to travel by bus in Vietnam. It’s fully secure (though not as much as the train) and let alone the comfort, which is superb!

We traveled from Saigon’s Ben Xe Mien Tay (Ben Xe = bus station)  to the city of Can Tho. At the station the carriers have their own ticket windows. We used FUTABUS company for our trip. Futabus launches more than 60 buses per day to Can Tho. Other than that Futabus basically covers the entire country with its lines. 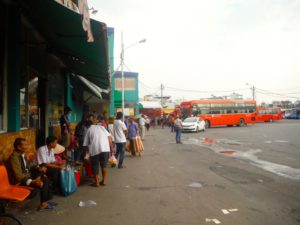 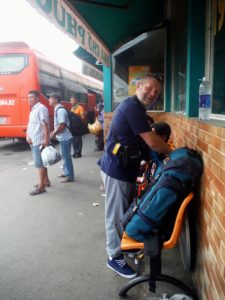 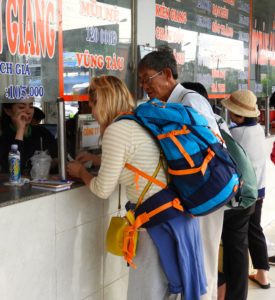 Can Tho city is about 160 km away, it is a 4 hour ride (with half an hour break) and it costs only 115,000 VND (5 EUR) one-way. And what we received for this price was unbelievable for me, absolutely incredible! My father (whom I traveled with) when he saw the bus, he broke into a joyful laugh as a little kid getting a present.

First of all, it is forbidden to enter the bus in street shoes (as everywhere else in Vietnam)! Of course this doesn’t mean that you have to be barefoot throughout your trip, there are some slippers at the stairs of the bus that can be used (of course, Vietnamese slippers).

It was already quite amazing, but our jaws dropped when we saw and then experienced the comfort we would enjoy for the next few hours. Every passenger has his/her own seat on the bus (there is no such thing as overbooking), but what kind of a seat! You can adjust the position of it into almost a horizontal position and sleep in it comfortably. In addition, everyone received bottled drinking water, there are reading lamps and USB inputs for charging the phones. Oh, and the Wi-Fi!

We only used this type of transport in Ho Chi Minh between the airport and the city. And just because it would have been difficult to get from the airport to the Mien Tay bus station in a different form, or later at dawn from the hotel to the airport.

There are taxis to the left of the terminal once we get out. The most reliable taxi comapanies are Mai Linh (they have regular cars and minivans, in white and green colours) or Vinasun (white). For payment it’s best to use local currency because one can get cheated if paid by USD or EUR. The downtown area (District 1) should cost about 150-170,000 VND (8 EUR) based on the standard fee and the trip takes about 40 minutes. You can pay in advance at a Taxi desk located at the terminal, but it’s not going to cost less. Make sure that the driver turns the taxi meter on and track the numbers spin on it.  Departing the airport costs 10000 dong, this is being charged already at the beginning of the ride.

Saigon and Hanoi, so basically South and North Vietnam is connected by a railroad structure of over 1700 km. This historic railway is a very important part of Vietnam’s daily life. The iron-horses are pounding through rice fields, dense jungles, seashores, tiny villages and big cities on this line every single day. The collective name for the trains is Reunification Express, however it is not a single train (don’t let the search engines confuse you when buying a ticket). 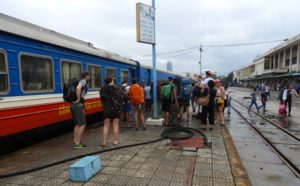 Onboard you can choose from different seat-categories (soft or hard seats) or – of course – sleepers (for 6 or 4 people) are also available for longer distances. The prices change based on the form and distance of travel.

We traveled between Da Nang and Hué on one of these trains, only a small part (107km) of the whole distance. We did not buy a ticket in advance online, we got them at Da Nang train station right before departure, and frankly, we were lucky that there were still some seats left for us, as the train was completely full. We were also lucky enough to have our seats on the side of the sea. I was extremely pleased about this, because from here the view of the sea was spectacular and it was so wonderful to watch the city of Da Nang in the background, the small bays and and the hills with all the trees, bushes and plants that flourish in thousands shades of green. It was just a fantastic experience overall. 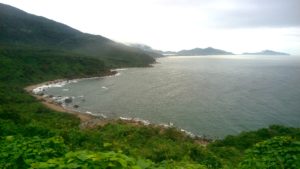 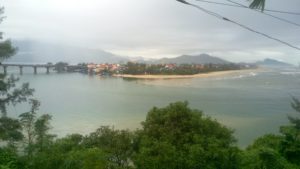 By the way, there is service on the train, offering cold and hot meals, and of course soft drinks, coffee and tea. We tried one of the hot meals, for the whole bowl on the picture below we paid approx. € 1,5. And it was pretty delicious. 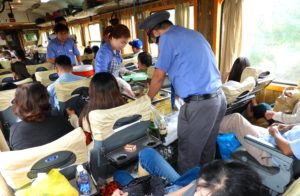 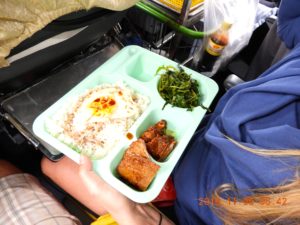 Those who are not satisfied with the offer of food and drinks on the train, can buy some chips, sweets or some local snacks at the station (without getting off) when the train stops. 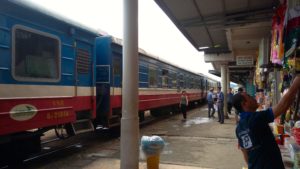 Personally, I’m a little bit sorry that we did not use the train more, next time I’ll make sure I’ll add a few more train rides into my itinerary.

The scooter in Vietnam is the main means of transport. There are really too many of them, everybody is on their motorbikes. Adults, teenagers, kids, dogs, cats – basically everyone travels and everything gets carries on it. There are often 5-6 people on the little twin-wheeled engined bike: a father that drives it, and there is a small child in front of him, who in no case disturbs his dad in vision; two other children behind the father, basically adhered to each other, and then the mother on the back who may have another baby in her lap. There are the ones that pull a trailer behind the scooter or the ones that carry some huge objects, say, even a table. And they’re moving and moving. They travel alone, with families, as private couriers, basically as they need and want to. 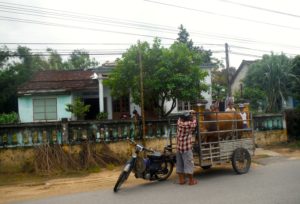 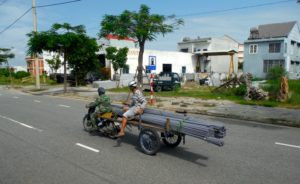 In Vietnam it can be really said that traffic is communal. And overall a very special experience. For an outsider it can look super scary. At an intersection with another 50 or even 100 bikers who are waiting for the green light with a few cars and buses involved too. Once the lamp changes its colours everybody starts moving. In addition, the lights turn green for those too on the opposite side and they also start moving. And of course, not everyone wants to go straight, some turn to the left, some to the right.. And this whole situation seems to be an incomprehensible chaos, every now and then it looks like there is going to be a crush. But no. And that’s because people are incredibly watching out for each other and they are super compliant. And voilá, the whole system works quite perfectly! I’ve never seen this so intensively in any other country. 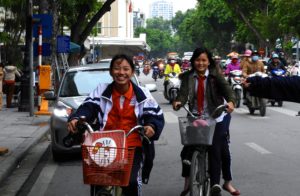 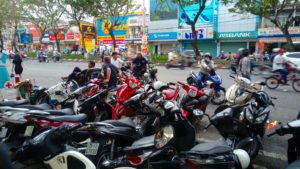 Well, I was not brave enough to drive a scooter, but my father (who was my travel companion) was and he is an experienced driver and, moreover, very courageous and adventurous too. So we scooted to a lot of places and often visited places in the middle of the nowhere too. And you know, those experiences that we gained on such little getaway trips meant the most for us and are engraved into our memories forever. That is why it is worth renting scooters in Vietnam.

Depending on the place the daily rent rate is about 4-5 EUR. Bargaining is possible, especially if we rent for several days 🙂

Local buses can not be clearly categorized. We had very different experiences with them. We used local city buses twice in Hanoi and twice in Da Nang.

In Hanoi, buses 7 and 17 run between the city center and the airport. These buses are modern, comfortable and air conditioned. They are really similar to our airport buses in Budapest. At the airport, they leave from the right of the terminal when you exit. 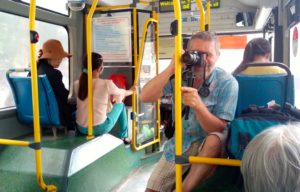 The bus from Da Nang to Hoi An is another cup of tea. A drifting, creaky bus, gutted from the outside, and not too spared from the inside either. But it does the job.

Bus 1 departs from Ben Xe Da Nang to Ben Xe Hoi An and one can get on it at different stops. Well, or rather jump on it. Yes, you heard it, jump. Because the bus only slows down in the stop, it does not stop completely, and the ticket manager (who is also a cashier) will help lift the passengers up while the bus is in motion. I’m not saying this acrobatic scene was what I imagined for myself as I was totally not prepared for it, and it was not a simple stunt with our big backpacks. But at least we had a great topic to talk about for the rest of the bus ride to Hoi An that took about 2 hours. And of course we were watching locals and wonder how professional and elegant they are white doing this “sport”. 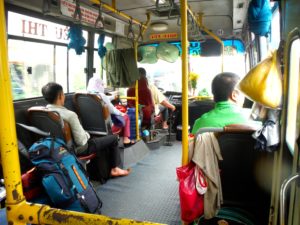 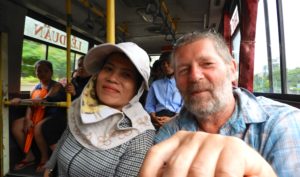 The ticket costs 25,000 VND (EUR 1) and can be bought from the inspector walking up and down in the bus.

From Hoi An bus stop you can take a taxi or a scooter to your accommodation. We picked a scooter as a taxi ride to our beachfront home-stay. Perhaps the regular taxi would have cost the same (we paid about € 5 for the 2 drivers), but the scooter taxi looked much more fun. 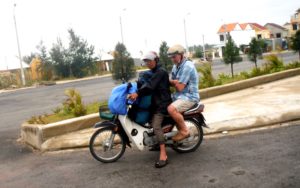