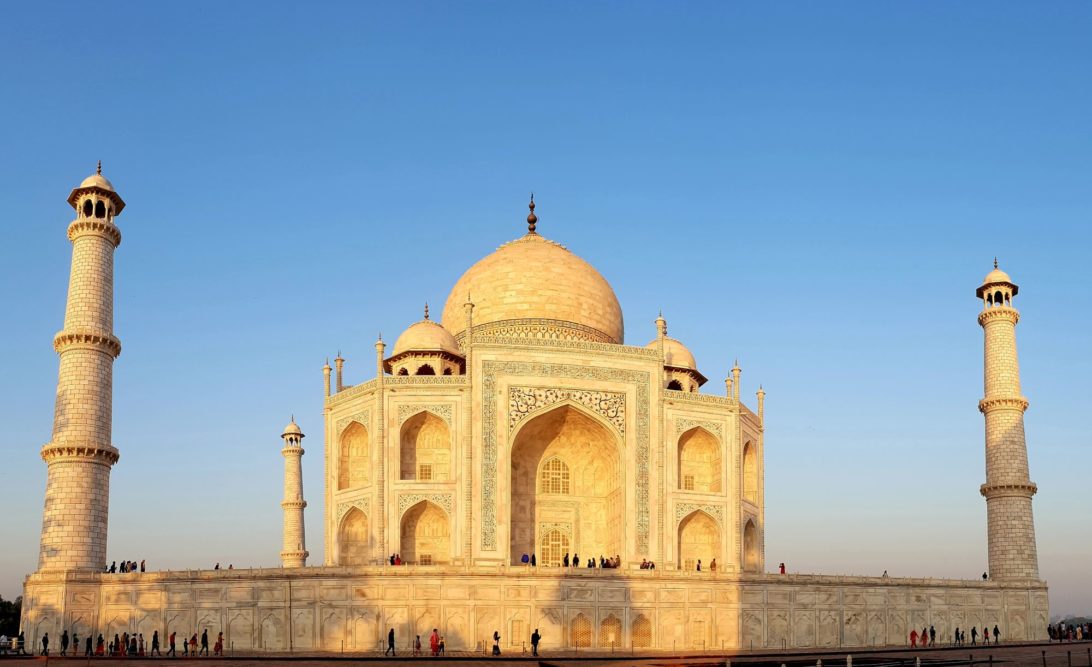 I’ve already written a post about the Taj Mahal earlier that had a bit more of a personal character.  Now I want to share some hard facts and give advices to make the visit as easy and enjoyable as possible. Let’s admit that a building that is listed as one of the 7 wonders of the new world, attracts huge masses and they can often deprive us of real experiences. It’s worth reading till the end…

The Taj Mahal was built on the banks of the Yamuna River in Agra, 215 km’s south from Delhi. Determining how to get to Agra Delhi will be explained in another post. 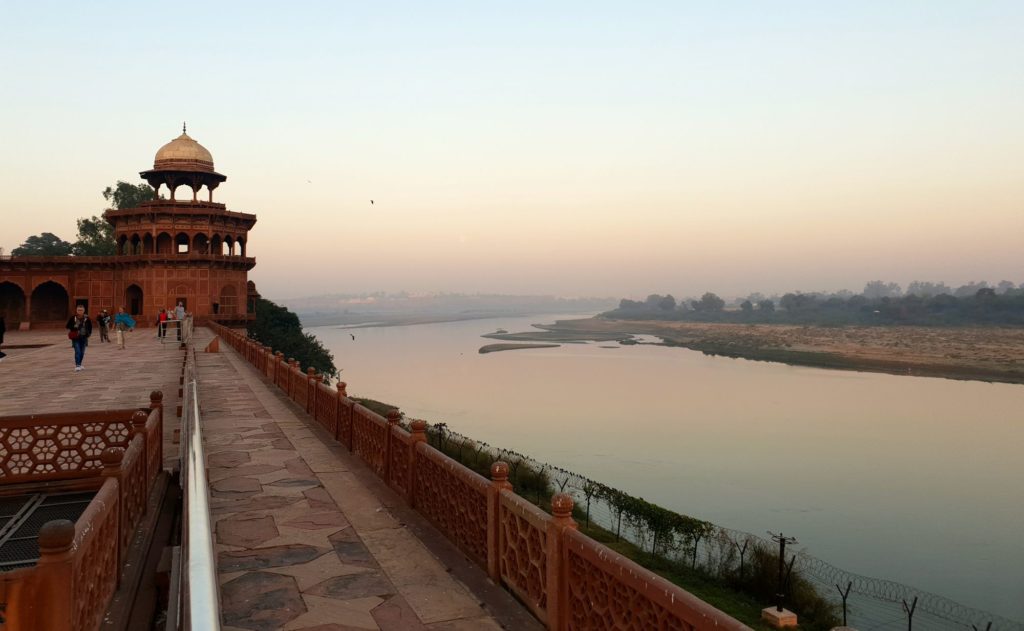 The Mausoleum itself lies on a large area where except the Taj Mahal there is also a mosque and a salon where guests used to be entertained. The two buildings on the two sides of Taj Mahal are completely identical. In front of the tomb there is a big, geometrical garden that can be accessed through the Great Gate. While the Taj Mahal shines in white marble, the mosque, the salon and the Great Gate are made of red sandstone.

In addition, there is a late-night visiting time, and that is on the day of the full moon and two days before and after it. The number of visitors is very limited, only 400 people in total are allowed to enter during these evenings and they can stay only up to 30 minutes inside the area.

There are 2 ways to get your tickets:

The cash registers open 1 hour before sunrise and  close 45 minutes before sunset. The disadvantage of this is that we have to cue twice: first when we buy the ticket and then when we cue to get in. This can be of course eliminated if we are in a group and someone is buying the tickets and someone is waiting at the gate. 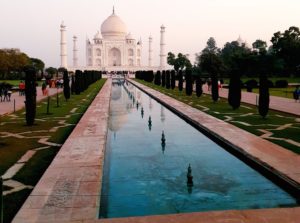 Now, thanks to the ASI (Archaeological Survey of India), tickets can be purchased online. The ticket is accepted in printed version or electronic form. It is important to know that it’s valid only with an ID for a given day and for a concrete time-slot, so it can not be transferred. Foreigners get 50 Rs. discount on the online purchase, Indians get 5 Rs.

On the following website it is legal and safe to buy tickets not only to the Taj Mahal, but to many other monuments too: https://asi.payumoney.com/#/

Under 15 years of age entry to the Taj Mahal is free of charge.

There are 3 gates that lead to the Taj Mahal 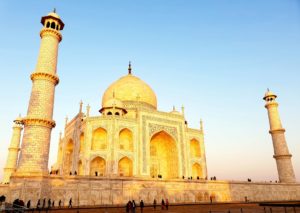 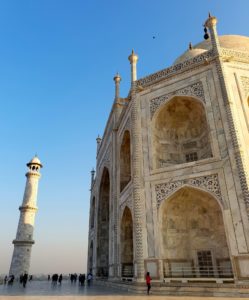 Bargaining is a must every single time when buying something, as sellers tell you at least double of the normal price, specially if you are a foreigner. There was only one single time in India when I didn’t even want to bargain. Stepping out from one of the metro stations in Delhi, an old man offered me his cycle rickshaw service for a mere 40 rupees (0,5 Eur) for a distance that took about 15 to 20 minutes to walk and in addition the walk could have been considered a suicide attempt (I know because I walked back). Well, in India it’s part of the daily life to glide between cars, buses, rickshaws, bicycles and trucks, hoping that you get out alive.

Kinari Bazaar has plenty of restaurants and cafés with a rooftop terrace offering great views of the Taj Mahal. One of these is approx. 350 meters from the Eastern Gate, the Kamal Hotel (Near Tajganj Police Station Tajganj, South Gate, Agra, Uttar Pradesh 282001, India). Now, I do not recommend the accommodation there at all and I make this statement based on my own experience. True, it’s incredibly close to the gate, which is very convenient, especially when you want to visit the Taj Mahal during the sunrise, but I have never in my life seen such a dirty, disgusting hotel. The bathroom was even scary to shower in, and the top of the toilet was full of some kind of unknown hair. I just prayed not having to spend my night with fleas and bedbugs in the bed. Fortunately, it wasn’t the case after all. Anyways, it’s quite pleasant after the visit to have breakfast while still being able to watch the Taj Mahal, especially if we don’t feed ourselves in the morning. Eating inside the Taj Mahal area is strictly forbidden, food is not even allowed inside, there is a very stringent security check at the gates. I swear it’s more difficult to get in than to some airports (outside of India)

Obviously the sunrise represents the beginning of a new day, but for me it means a little more than that. I always have a very positive feeling in front of the rays of the rising sun, for some reason I feel incredible warmth but not in its classical sense.  I really feel that I have been given a new day in my life, a new beginning, a day that can hold wonderful surprises and opportunities for me. That’s why I like sunrises so much. And that’s why I was so excited  for the sunrise at the Taj Mahal. I felt that this venue would be perfect for me to take a few minutes and be thankful for all the amazing things that happen to me in my life. Not just this one day, but in general. Of course, every day I’m grateful, but somehow in a moment I was waiting for nearly all my life, I was more aware of how lucky I am.

Now, a little geography… If the sun rises on the east, then it is clear to me that it is best to watch it from the west (fortunately, this is not the case for everyone). At the Taj Mahal this means that crossing the Great Gate (facing the tomb) we should keep to the left and walk straight to the mosque. The mosque has a perfect view of the mausoleum (all 4 sides of the Taj Mahal are the same) and the rays of the rising sun in its right corner. It can really be quiet there for minutes, as only a few tourists will be loitering around here at this time. 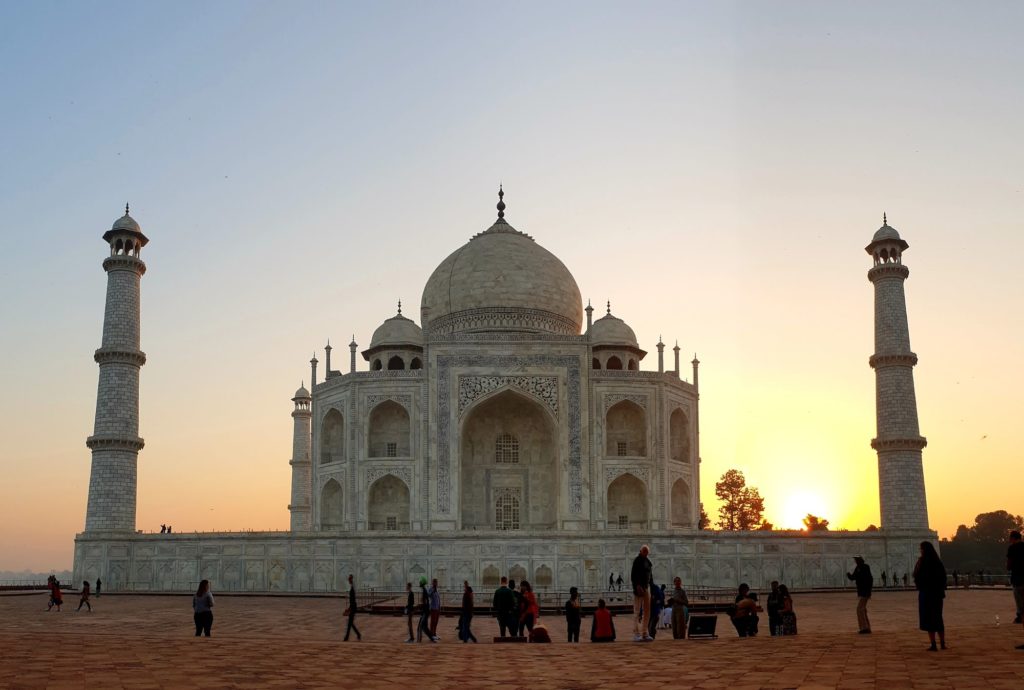 You should use every second of this short time because when the crowd starts to flow in, the momentum is not so enjoyable anymore. 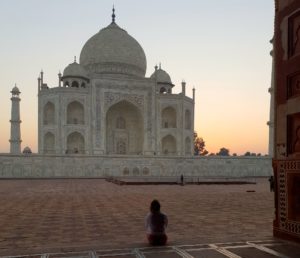