Angkor – 3 things I loved about it 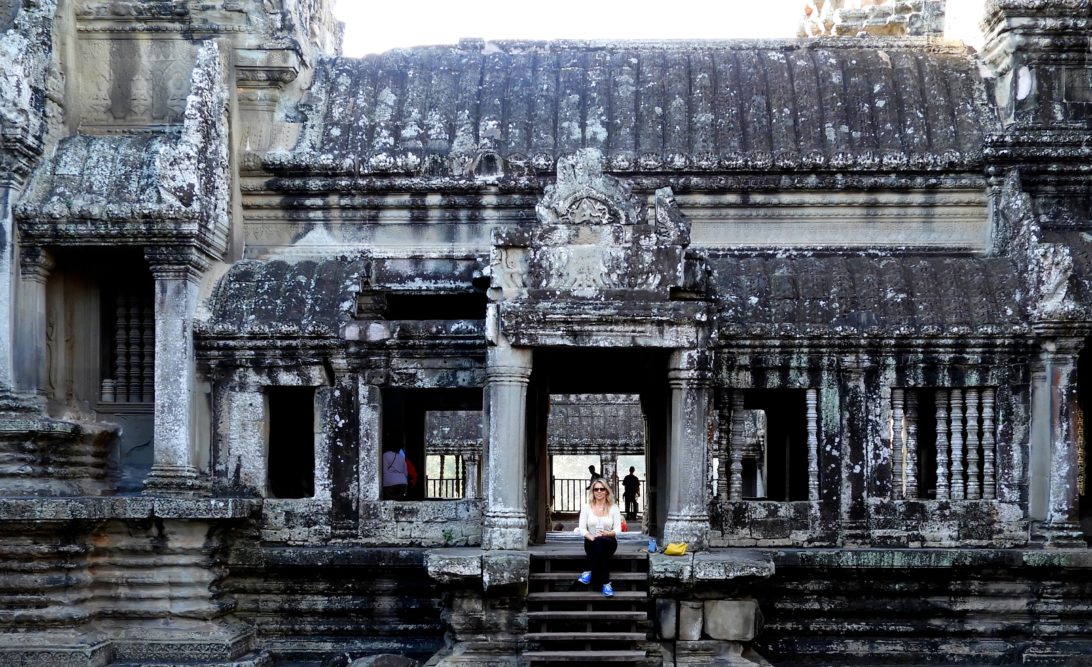 Angkor, just the way it is, is wonderful, sublime, dazzling, glamorous and I could go on. It’s been always my great dream to visit this mysterious temple town. After all the information I read and photos I saw I thought I was ready for Angkor. But I was really wrong because Angkor had some really great surprises for me. I would like to highlight 3 of these. Here they are …

Everyone has a picture in mind of Angkor Wat’s sunrise, right? But how it feels when the first rays of sun in dawn begin to emerge from behind the dazzling, magestic towers of Angkor Wat? What’s the moment like when the sun illuminates the towers and its wonderful details start to be visible? And when in a mildly cloudy weather, the blue, yellow and red colors fade together and dance in the sky while all this is reflected in the little pond in front of the temple? Well, I’m telling you, it’s dazzling, breathtaking and uplifting! 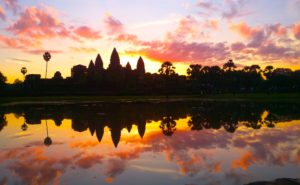 But how can we be part of this miracle?

You must come to the scene really early at dawn for sure. This is easy with a 3- or 7-day ticket, because there is more than one day available to visit. With a 1-day ticket the situation is a little bit more hectic, as we have to be before 5:00 am at the Visitors Center, which is 7 km’s away from the entrance of Angkor Wat. But there is an option that can help eliminate the rush in the morning, and we can secure our place at the pond to greet the sunrise. The 1 day ticket can not be purchased in though – theoretically.

But! Practically it can be. The afternoon before our planned visit, we can buy our ticket approx. after 16:30 for the next day – with this we don’t only spare the queuing early in the morning that can result in missing the sunrise, but in the same time with this ticket we can catch a sunset on the day of purchase – totally legally.

You can read similar useful tips about Angkor in another post about the temple complex.

If we really want to have the best possible place to secure without being distracted by others, it is worth arriving really early.  On paper the gates of Angkor Wat open at 5 am, but practically the visitors can enter from 4:45 am. We were riding a scooter, so it was a pretty easy task, jumped on our steed and at 4:30 am we were on our way to Angkor. I was terribly tired as I could hardly sleep at night, but the adrenaline kicked in and as we approaching our target on the Charles de Gualle road, the fresh air air pumped some power in me, so I was wide awake for the miracle to happen. 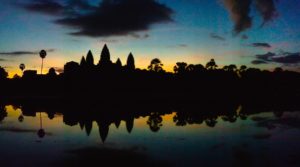 Angkor Wat must be approached from the west side and after entering we should hurry towards the left bank,  particularly the lower left corner of it.

With headlamps on our heads, we arrived to the pond in dark, only the moon and the stars were shining above us, and some other people’s phones or headlamps were illuminating, the ones who also wanted to experience the most from Angkor. We stopped at our chosen spot – at this time it was only a few of us. A local vendor came up to us with plastic chairs, and she said that it will be better for us to rent the chair for $ 1 because we’ll have to wait a long time for what we came for. Well, I believed the lady, so I paid for my chair that she positioned in place. At first I was saying that I would like to sit a bit further, but she persuaded and she told me that she is out there every single day and she know where the best view is from. Well, finally I gave in and settled down on my base. One thing, the chair was really worth to pay for. On one hand because of the long waiting time. On the other hand, because after 6 pm there was a huge crowd around the lake, and everyone wanted to get closer and closer, so people moved forward towards the pond.

The chair gave us a very stable spot, no one could fit in front of us.

Then we oly had to wait patiently and wonder as the first rays of the sun coloured the clouds in the sky; and then slowly the sunbeams creep out from the coverage of Angkor Wat’s turrets. And there was light. 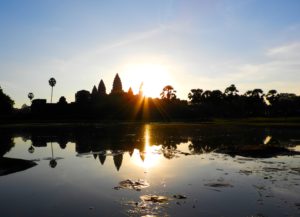 Symbiosis of nature and architecture

Angkor was pulled out from the depths of the jungle in the 19th century by French researchers and I am convinced that this site inspired the empire of apes in the original 1967 “The Jungle Book” movie. Since it was my favorite tale (my first and only for a long time on a VHS – yes, we had those!) in my mind I was able to fly to this mysterious place where King Louis reigned and where Mowgli was detained by the apes for awhile until his friends, Baloo and Bagheera rescued him. In fact, I imagined Angkor – especially the whole atmosphere of the enormous carved stone sculptures, the sky-high trees, the woven ropes and roots of trees – exactly as what I had seen on the TV screen for years. 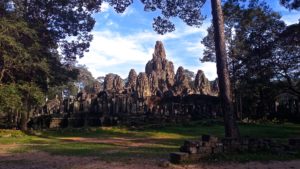 The mighty trees – where some of them have boles that could not be surrounded by 10 adults in a people-wreath, thick roots climbing on stone walls, tall ancient trees rising on rocks, trees embracing rock-gates with their roots, all survived in the course of time. How is that? 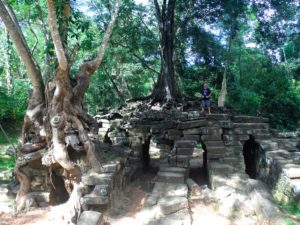 Well, nature simply went against the will of the humans and nicely showed its middle finger to them. Angkor represent this for me – among other things.  Life proliferates in the whole area! 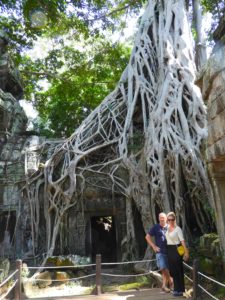 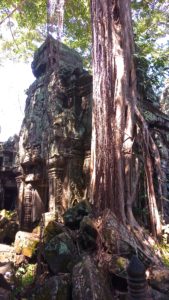 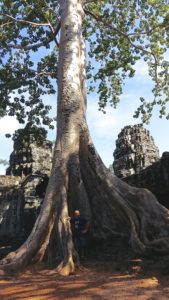 My dad had two wishes during our Indochina adventure: he wanted to fish in Vietnam in the sea and he wanted to see monkeys in their natural habitat in Angkor. Since I could not fulfill his first wish, I literally prayed that somewhere, anywhere in Angkor, he’ll meet some monkeys. At least one, because then he can not say that I didn’t keep my word at all. 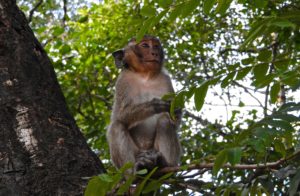 We were approaching Angkor Thom from the West through Victory Gate and after a few meter leaving the gate behind a huge stone fell off my heart. At the side of the road a monkey was sitting playing with a plastic bag. At this point the ray of hope lit up … If there is one, and in such closeness (not somewhere between the foliage of the trees), then there should certainly be more of them.

I was terribly delighted when the locals told me at lunch that we will meet a lot of monkeys at the Bayon Temple, and if we want to, we can feed them some bananas. That was it for us, we bought 2 large portions of bananas and we could hardly wait to arrive to see our new playmates. 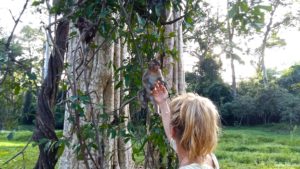 We attacked Bayon from the north, parked our scooter, and placed helmets neatly on the mirrors. Dad dragged the bananas out and immediately little animals began to run towards him from all directions. For sure they’ve sensed the sweet smell of bananas. Fortunately, some of the bananas have been hidden away in the trunk on time. If someone is not careful enough, in an inconspicuous moment the monkey attack from behind, they smoothly seize and steal the whole bag of bananas. They are super shameless. But they’re so cute at the same time. It’s such a great experience to feed them. And it was so nice to observe as they climbed up to our shoulders, as they observed everything, they hung on the trees, ran around, ate anything, played with each other. 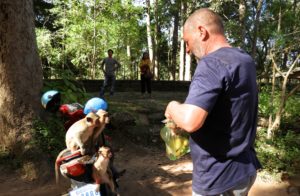 A smaller team settled on our scooter, dropped our helmets on the ground, and started checking themselves out in the mirror. It was a real monkey parade! 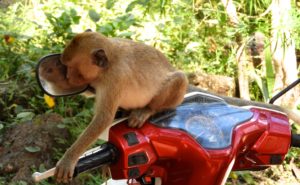 There was one that ran up to a 4-5-year-old little kid, snatched the half-liter PET bottle out of his hand, sat down, unrolled the cap, drank and threw the bottle away.  This is a good example that if we are littering, we do not only have a bad impact on our environment and our fellow human beings, but monkeys also quickly follow our behaviour. How beautiful is the expression that someone is mocking (probably comes from the word monkey, at least it sounds like that) the other … 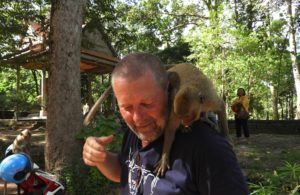 It’s definitely good to stay away from the bigger individuals as they are physically very strong and their creeping teeth are not too convincing either, especially not from close up.

What’s good is that there are local guards who, if necessary, can keep the monkeys at bay. Because let’s admit: they are cute but they can be dangerous too, so we need to be very careful with them. After a mother monkey jumped on my back  and started screaming from the top of her lung while I fed and caressed her baby, they did not look so cocoon and friendly to me anymore. To be frank, the whole situation was incredibly scary. But thankfully, the beast has jumped off of my back, so I was not harmed at all except a little shock. For sure this whole situation appeared from my own mistake and I can declare that I’ve learned from it. 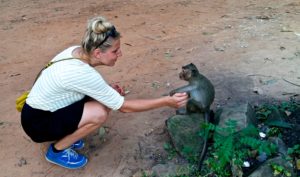 It is worth being careful with them, and if someone doesn’t want to get in any touch with the monkey, should make sure not having any meal nor drinks in hands and just walk away calmly.