Grated potato dumplings with sheep cheese, the national dish of Slovakia – with a twist 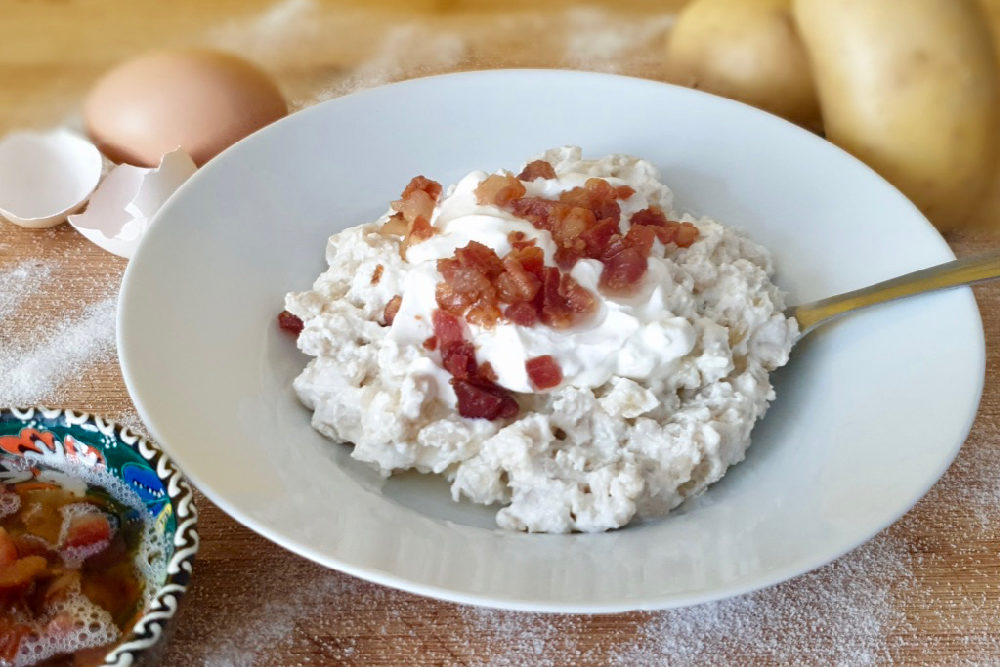 We recently visited the High Tatras in Slovakia and spent our evenings in a koliba ( typical Slovak restaurant). We had to of course taste the Slovak national dish, the grated potato dumplings with sheep cheese (bryndzové halušky). Growing up in the south of Slovakia, visiting the mountains for skiing with my family quite often, I have already tried this cheesy dish in many restaurants in the country and prepared it several times in my own kitchen too. But I always missed something from the home-made version, something extra. So I kept making it and now I can say that I’ve finally managed to really master it (based on what we like at home) – adding a little twist or two. So let’s see my “Hungarianized” (hence the sour cream among the ingredients) version. I hope no one will stone me for this 🙂

1. Boil water in a bigger pot, add some salt and 2 tbs of oil to it. While the water gets boiling, we prepare the bacon and the dough for the dumplings.

2. Chop the bacon to small bits and fry in a pan over a very slow heat.

3. Based on the original recipe we grate the peeled potatoes on a grater. I have done it this way too in the past. However, now after peeling them I used a shredder and  shredded them almost to a paste texture. This way it was much easier to work with. From now I will only use the machine. Squeeze out most of the water from the potato mash and place it in a larger bowl. Add pepper to taste and be brave with the salt, as the potatoes absorb quite a lot of it. Add 1 egg, 1 tablespoon of oil and the flour. I didn’t define the exact type and amount of flour because almost any type can be used – we have to keep in mind though that each one behaves a bit differently. This time I mixed plain wheat flour with oatmeal flour, but I worked with wholewheat too in the past. The point is to use the right amount to get a softer, slightly sticky, gummy, homogeneous dough. Mix the ingredients very well together.

4. When the water is boiling, take the dumplings chopper and use it work the dough into the boiling water. In case you don’t have the equipment, just drop tiny pieces of dough into the water from a wooden board using a knife or spoon (this will of course take longer). Wait for the little dumplings to break to the surface and cook them for 5-7 minutes. Then use a strainer to remove the dumplings from the water and drain the water off. I also rinse them under running lukewarm water to keep them from sticking together.

5. The original recipe says that the dumplings have to be mixed with the bryndza only. And here comes my other twist, I mix the bryndza with a little sour cream. Once my sauce is ready, I blend it into the ready potato dumplings.

6. When serving, we can add just a little extra sour cream (I can’t belie I’m a Hungarian) and sprinkle the top with the fried bacon.