Hallstatt – the viewpoint and the salt mine 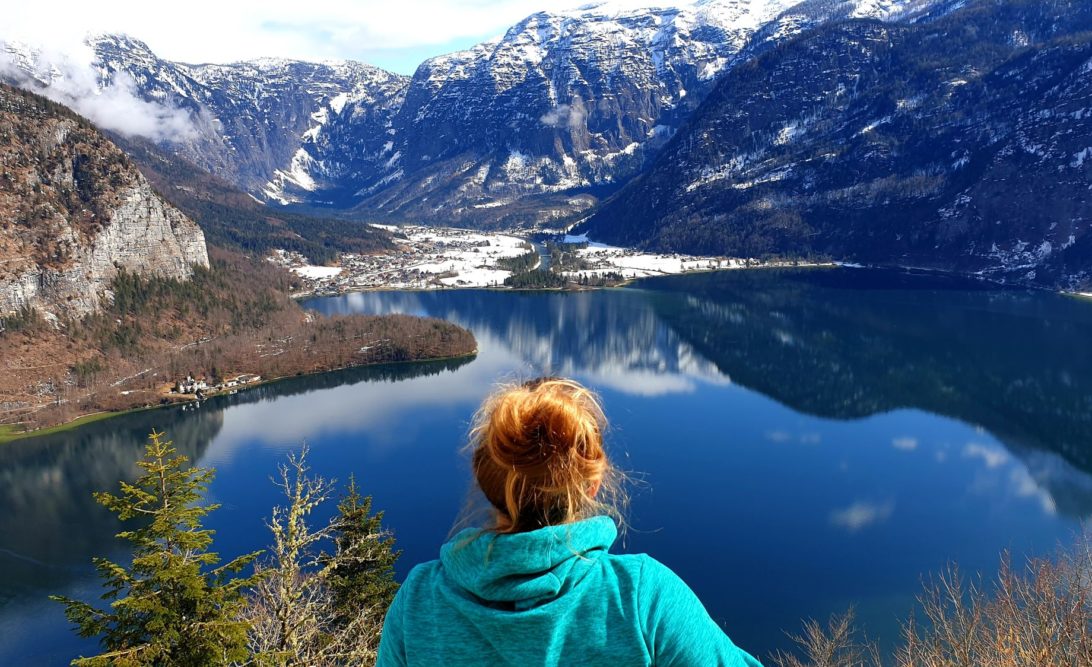 Hallstatt, the surrounding mountains and a huge, deep-blue lake must be seen from above! And the most suitable place for this is the skywalk bridge built on the hill behind the village and the triangular lookout viewpoint at its end. Underneath is a precipice so it’s the perfect spot for those scared of heights, to fight their fear.

The viewpoint itself was probably not accidentally built here, as it just a short walk away from the famous Hallstatt salt mine.

How to get to the viewpoint?

We really have the following 2 options:

We can also choose the easier, but more eye-catching option and get to the hill with the funicular. The advantage is that we can admire the view during ascension (which lasts about 2 minutes) and we don’t get tired reaching the top. The disadvantage is that it costs money, and it’s not exactly cheap. 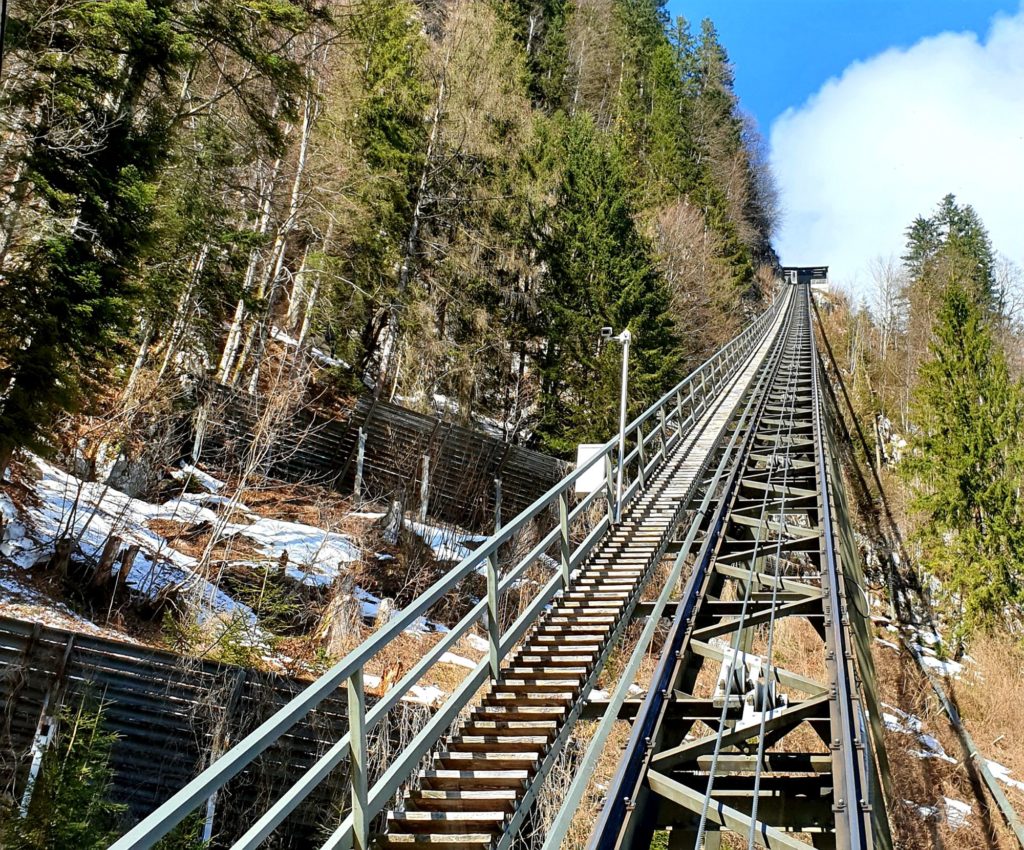 In January the lift is not operating. In the high season (from late March to late September) it runs from 9:00 to 18:00 and off-season the last ride down is at 16:30. Afterwards we can only rely on our feet. The current timetable can be viewed online.

If we are on budget and we are pretty fit, or we just feel like, we can also choose walking. Underneath the viewpoint there is a zic-zac steep road that can be reached either from the centre of the village or from the starting point of the funicular, and leads up to the Rudolfsturm restaurant that awaits guests to have a coffee, food and relax and enjoy the breathtaking view. The road takes about 40 minutes on foot from the center and 1 hour from the cable car. The terrain itself is quite steep, so it is good to prepare in mind for the ordeal.

Since we decided to visit the salt mine too, we bought a combined ticket (salt mine + lift) and we were going to take the funicular up and then walk down. Well, that’s what we thought. Only that we did not expect the weather to be so crazy, at least on the beginning of March, that it’s impossible to rely on it and plan ahead based on it because literally any time the sky can fall off or a stronger wind can appear immediately ruining the perfectly planned programs.

So after all we ended up taking the funicular down from the mountain as well, but not because we were lazy, but because as we stepped out from the salt mine after the visit, the beautiful sunshine that we left behind was nowhere to be seen nor felt. Instead, clouds covered the sky and light rain was dropping. Yet we were lucky that we escaped the heaviest rain when we were wandering in the mine underground.

I’ve already written about when to visit Hallstatt (and where to park) and I don’t want to repeat myself. The only thing: at the beginning of March there was no huge crowd in the village, the Skywalk nor in the salt mine so we could enjoy every moment of our visit.

1) AT PLACE AT THE CASHIER

We took the combined tickets from the cashier at the departure of the funicular. If someone just wants to use the lift, I don’t think it’s necessary to buy the tickets ahead, even though in the high season there could be longer line.

Online purchase is also possible, perhaps during the high season may be more relevant for those who are interested in the salt mine too, because there is a limited number of tickets for the certain time slots. The maximum capacity of a tour is 150 people and there are 11 of them daily between 9:00 and 14:00.

For the prices visit the official website  as well as for the opening hours of the salt mine and operation times of the funicular.

The viewpoint platform, 360 meters above Hallstatt, reaches out from the cliff in the shape of a triangle. The weight of the nearly 200-tonne structure is countervailed by about 60 cubic meters of solid concrete, giving the platform total security. This is probably not a reassurance for those struggling with the fear of height, but it can be a good test for them. The breathtaking view of Hallstatt, the deep-blue lake and the hills and mountains that can even be covered with snow in early summer, serves as a reward. It is really a wonderful sight! 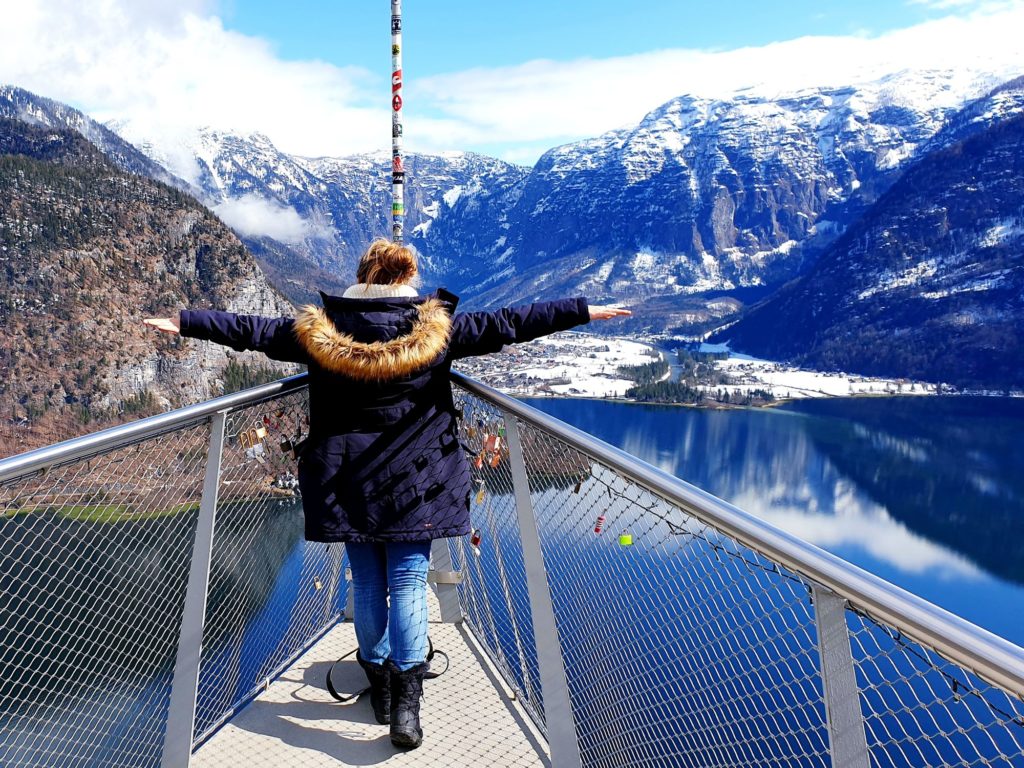 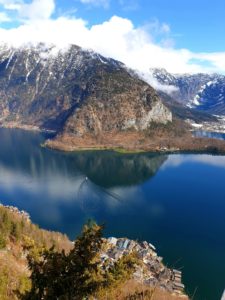 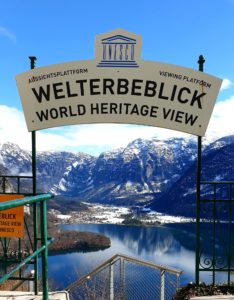 Since we had a wonderful sunny day, we could sit out on the terrace of Rudolfsturm for coffee and strudel. If you have the chance, do not miss it. For 2 cappuccinos and a hot strudel we paid 12 Euros, so it’s not a free ride, but to be honest, even in our capital (Budapest) there are places with very similar tariffs. 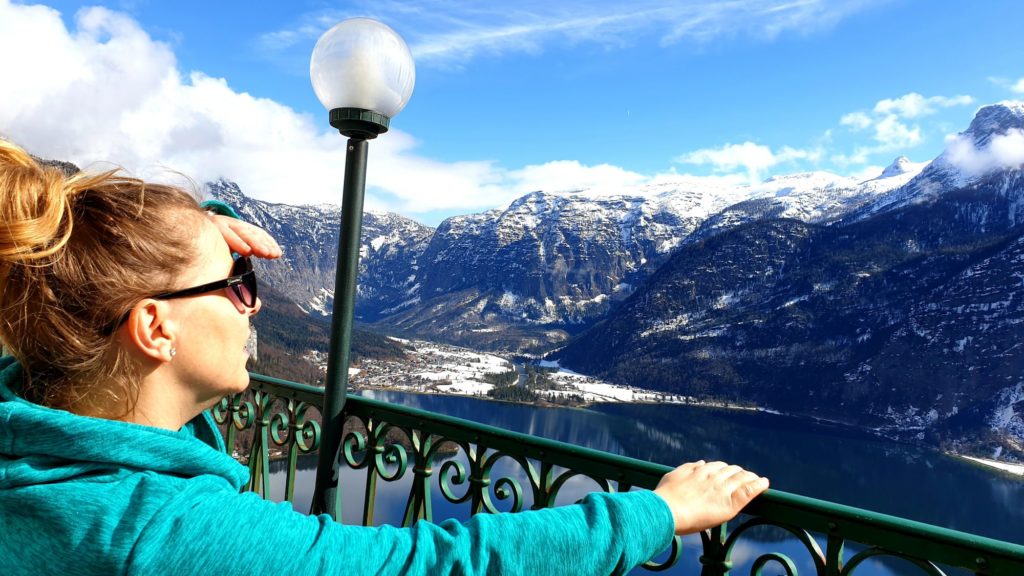 If we were already in Hallstatt we didn’t want to miss to pay a visit to the salt mine. Apart from this plant there are 2 more in the Salzkammergut region that can be visited, one in Altausee and the other in Hallein.

The one in Hallstatt is the world’s oldest salt mine, its roots go back to prehistoric times and is still in operation today. And to mention another curiosity, Europe’s oldest known and restored wood stair can be found here.

To the starting point of the tour a road leads up to the hill from the lift at the skywalk. The walk itself is wonderful here, only the sight is worth a it. 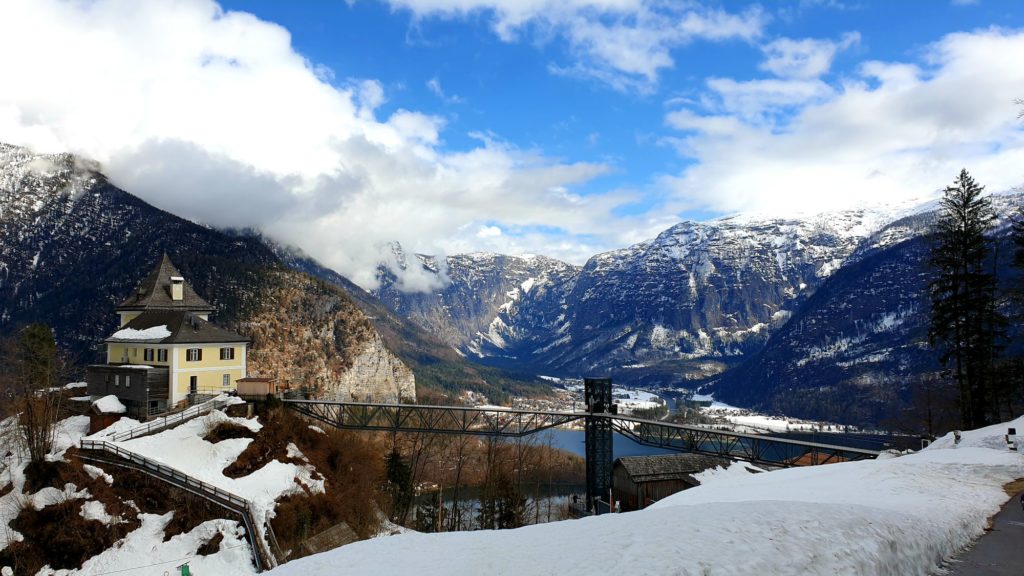 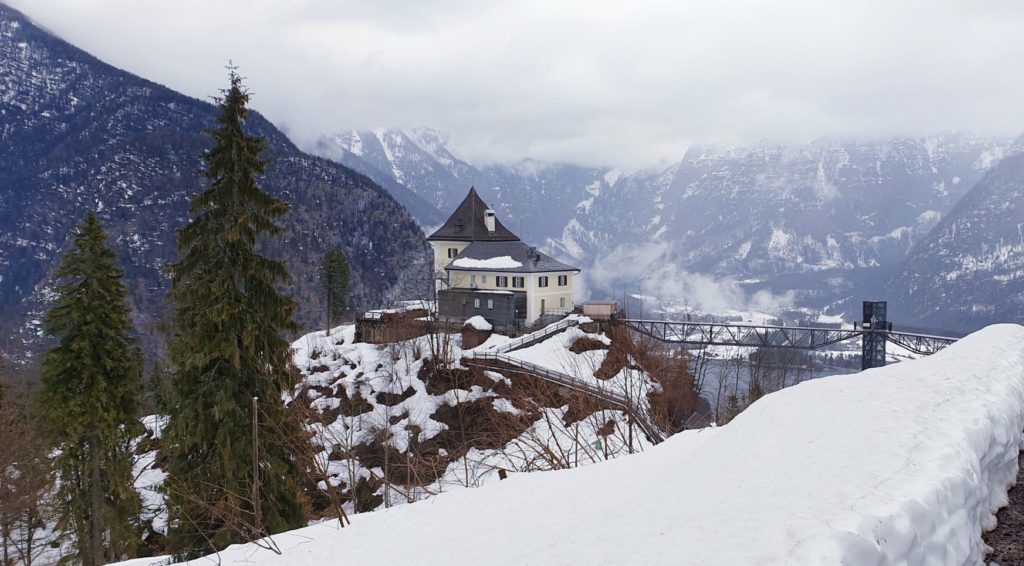 After we went through the ticketing gate, we found ourselves in a “dressing room” where we got a pair of trousers and a shirt that we had to wear over our own clothes. This way our clean stuff would not get dirty during the underground sliding 🙂 Really, we also had the opportunity to try the way of transport the real miners use and the it was terrible fun. In the end of the tour we even received a gift photo, for which, to my surprise, we didn’t have to pay. 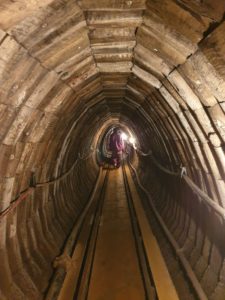 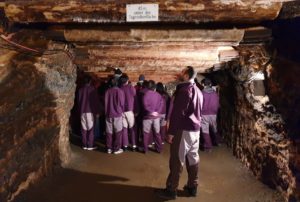 To be completely honest I was somewhat skeptical about the whole visit of the mine, I couldn’t imagine what might be exciting and interesting for me in a dark underground place. Sure enough that it’s not an everyday thing for a simple person to walk 400 meters below the surface, but the tour itself has given much more, in knowledge and in experience too. At various points spectacular video projections tell the story of the salt mine from the times the salt got into the mountains until the salt production of today. We can also try out the forms of transport in the mine, except the sliding there is a functioning little train too. But I wouldn’t share more info because you have to go and experience it on your own, promise that no regrets will follow. The whole tour is about 1,5 hours long and it’s really enjoyable. 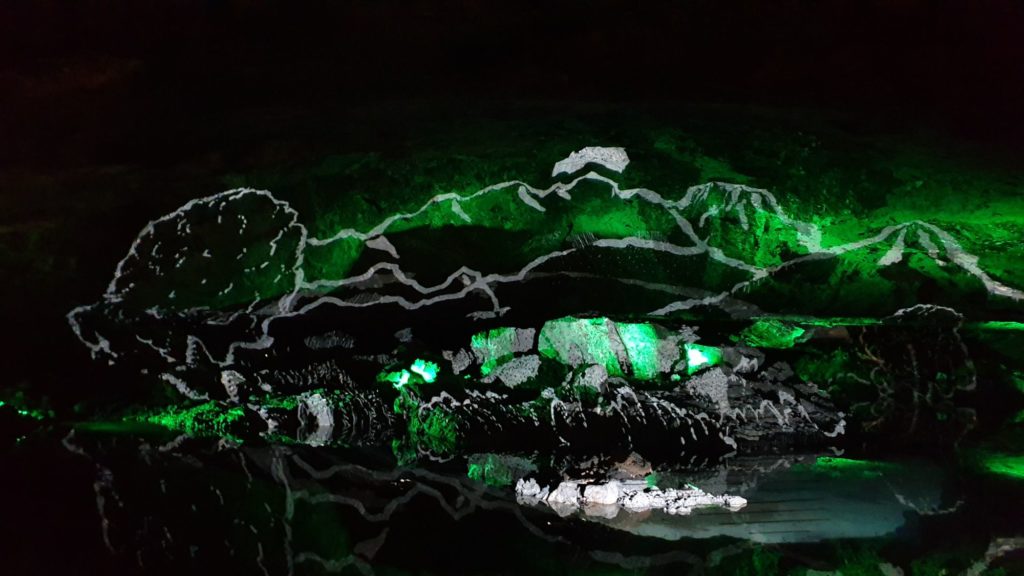