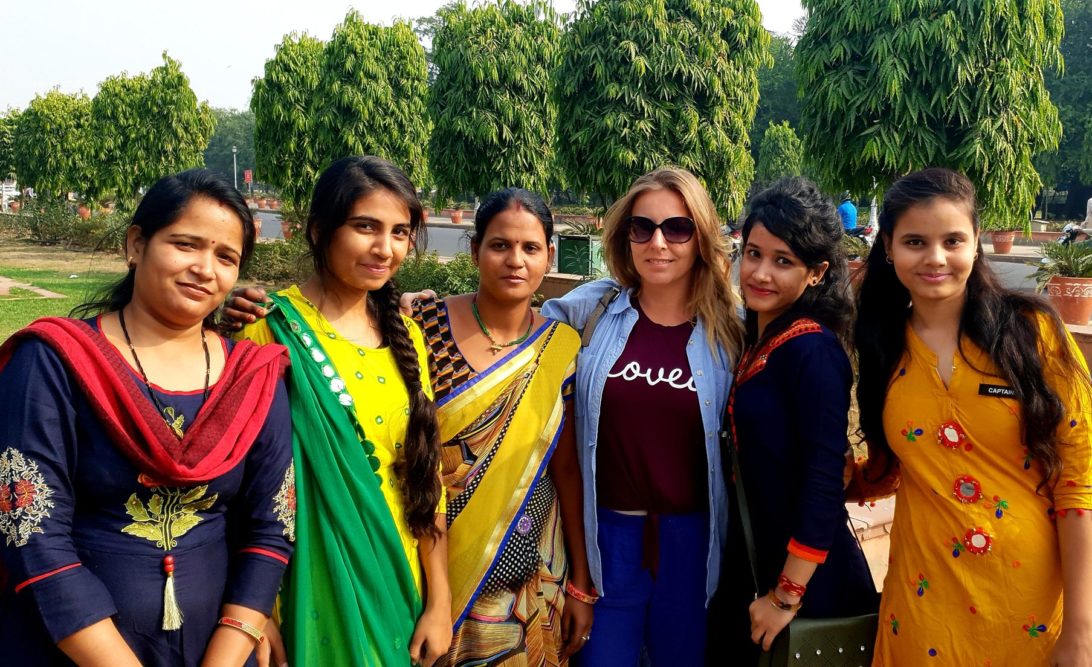 Nowadays we hear a lot of news about the situation of women in India and let’s admit, these news are generally not too positive.

When I started planning my trip and started to look into some tips before traveling, among other things I was interested in what bloggers think about women traveling solo in India. I found most of the forums say that women don’t really have the reason to be worried to travel alone (or I might have just opened the articles that were encouraging?).

Indeed, I think that if someone is in Rishikesh for a yoga course, where the person practically is closed for weeks and is surrounded almost by only Westerners who come to India for mainly spiritual purposes, there is nothing to worry about. Don’t be misunderstood, I have no problem with this. I have an acquaintance who has traveled to Rishikesh in the search of spirituality and she absolutely embraced it and loved it so much that now she says that her 1 month experience in Rishikesh was the most beautiful in her life. It’s so interesting and weird how we met at Delhi Airport. I was going up the escalator to the departures area and there I saw a girl running up and down like nuts. I immediately recognized her and called her name, although for the past 10 years I only see her on social media (she is a Czech girl living in the USA). She was trying to find the check-in desk to Dehradun and she was a bit confused as she was sent somewhere else. After finally we both checked in and passed security control, we had coffee and breakfast at the airport. Then she traveled to Rishikesh, and I headed towards Goa. I truly felt that this meeting was a straight miracle. How much is the chance of running into an old acquaintance like this at basically any airport in the world? Then later I realized that it was just one of the many miracles that happened to me during my adventure.

By the way, Goa… Obviously who travels to Goa and spends most of the time in a (luxury) hotel and its area there, also has no reason to worry in India. Goa is a completely different world like the cities of the Golden Triangle (Jaipur, Agra, Delhi). A lot of foreign (mainly Russian) tourists, many of whom live in one of the cities of Goa like modern-time hippies, or some kind of Corinthians. 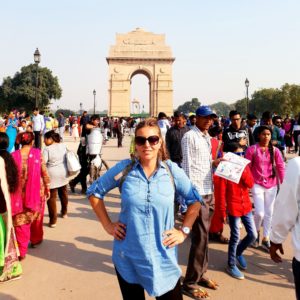 I have already written about India and my views on it. Now, I would like to take this opportunity and I would like to offer some advice (especially to women) who want to go to an Indian adventure solo (or even with a girlfriend or two).

I would like to say that according to the original plan I shouldn’t have been traveling alone in India (unfortunately my friend canceled last minute though) and I wasn’t always completely alone either (luckily I met some fellow travelers with whom we had wonderful times together).

So here are a few points that can help you to have a more enjoyable experience:

Confidently, loudly and clearly. You don’t have to talk to everyone who approaches you, especially if you don’t feel good about someone for some reason. If there is an internal sound, a pressure that might cause your stomach to clench, listen to it and run fast! Always listen to your gut feelings!

2) Stand up for yourself

And when you feel that you are being cheated on (because obviously they think you are the owner of a banknote printing factory) don’t leave it up to them, put your foot down and stand up for yourselves. I got into a conflict with a taxi driver in Delhi one time, who did not even hear me when I was nice to him, but when I yelled at him like a fishwife, he immediately coughed up the rupees.

From Goa (where I felt completely safe 24/7) I flew to Jaipur and I got off the plane late in the evening. I was a little worried that the taxi window (which can be found at all airports) will no longer be open, and I won’t be able to use the pre-paid taxi service. Don’t even think about to hail a cab in the dark to try to save a few rupees. In the end it may not work anyways. Just pay for your ride at the window, hop in and take a ride in an official taxi! 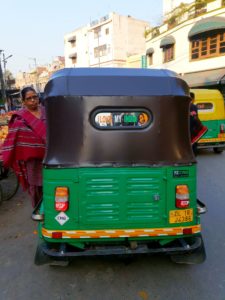 If you don’t have a local SIM card, make sure to have a map in your phone that you can use offline too (for example, offline maps of cities can be downloaded from Google Maps) and always follow your route on your device. In some situations this can be a lifesaver. At least it gives you a certain sense of security. It happened to me that my rickshaw driver had no freaking idea where my hotel was, yet he took the ride, because you know, money talks. When I saw on the GPS that we were going in a different direction that we were suppose to, my heart skipped a beat (and not from excitement).  At the end, I was the personal GPS of my driver.

Many suggest to dress like Indian women to avoid standing out too much from the crowds. Well, let me tell you something: you will stand out. More than you’d like to. Let’s admit that it’s a bit strange for a white girl, who is blonde on the top of that, to wear a saree or salwar kameez , walk down the streets of cities and try to mingle with the crowd. Of course, for special occasions like a wedding or other gatherings, I’d would love to wear traditional dresses too. Though in the big cities of India, among women, especially among the younger generation, western fashion is very popular, so they prefer to wear jeans and other clothes that could not be further from the traditions. 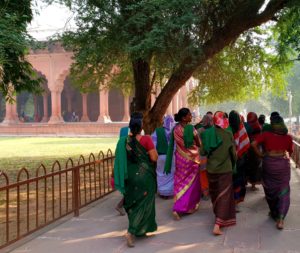 I am not saying that we should not dress like the locals, but it is by no means obligatory. The point is to have your legs and shoulders covered and avoid tight and / or short skirts and pants. But if your belly or back are bare, it’s okay. I even ssaw an older lady having her boobs hanging out a little from her crop top – but I wouldn’t recommend this to anyone to try. 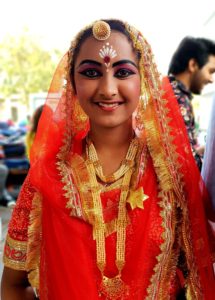 An exception to the above are the beaches of Goa. There you can safely wear shorts, strapless tops, swimwear and everything else that comes with beach time (no monokinis though!). We must count with stares engraved in our backs (or rather in our bumps) though.

I arrived to Jaipur with a high temperature (although the Spice Jet flight attendants have done everything to make me feel better) and I am convinced that it was because I have been over-thinking me being by myself on the streets of Jaipur (then Agra and Delhi), and my organization, as a result of stress, immediately started defeating itself. At the hotel I took a hot shower and tried to fall asleep, but some kind of strange, music-like sound kept bothering me. At first I thought that Muslims were called for prayer, but when I went out to the balcony I realized that in a nearby rooftop bar there was a Hindi concert. At midnight. When the whole neighbourhood was clanging from the vocals. Luckily, this was not hurting only my ears in the late hours, my hotel neighbor came out as well to the balcony. We started talking and it turned out that he was roaming around India alone too, and he wouldn’t mind having a company at all. The next day we dropped ourselves into Jaipur’s swirl together. During the day 2 Indian tourists joined us. One of them is is from the south, the other comes from the north and they also met in Jaipur in a completely random way.

Well, that’s how a sympathetic Italian guy became my company for 2 days in Jaipur and 2 super nice local guys who then followed me to Agra and Delhi. 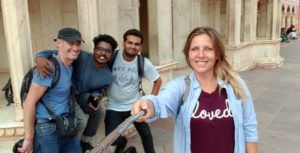 Do NOT enter an alley or a little street where no one is present or there are suspicious figures. Never, under any circumstance and especially not after the sun is set. Not even during day if possible! I don’t think I need to go into more detail about this! 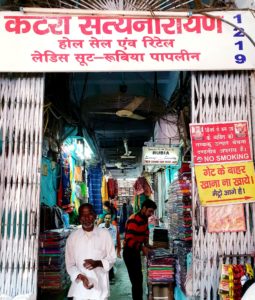 8) Don’t ramble around in dark

In the evenings, when I was alone, I always tried to stay out on the street as little as possible. I rather spent my time in the hotel, taking this time to talk to my family and friends. Since I always got up early, I managed to spend the whole day usefully and I didn’t feel that I was lacking anything at all because of being back in the room from about 7PM…

To say the least, if you have enough courage in yourself with a great amount of caution, your heart and mind are open to accepting a truly different and indescribably shocking culture, go ahead and  discover this wonderful world even privately. But I beg you not to go alone, because anxiety and constant alertness will deprive you of some fantastic experiences. And because there is no need to wake the devil up. I was lucky to find companions during my trip. And when we were together, it was much-much nicer to live through the moments!