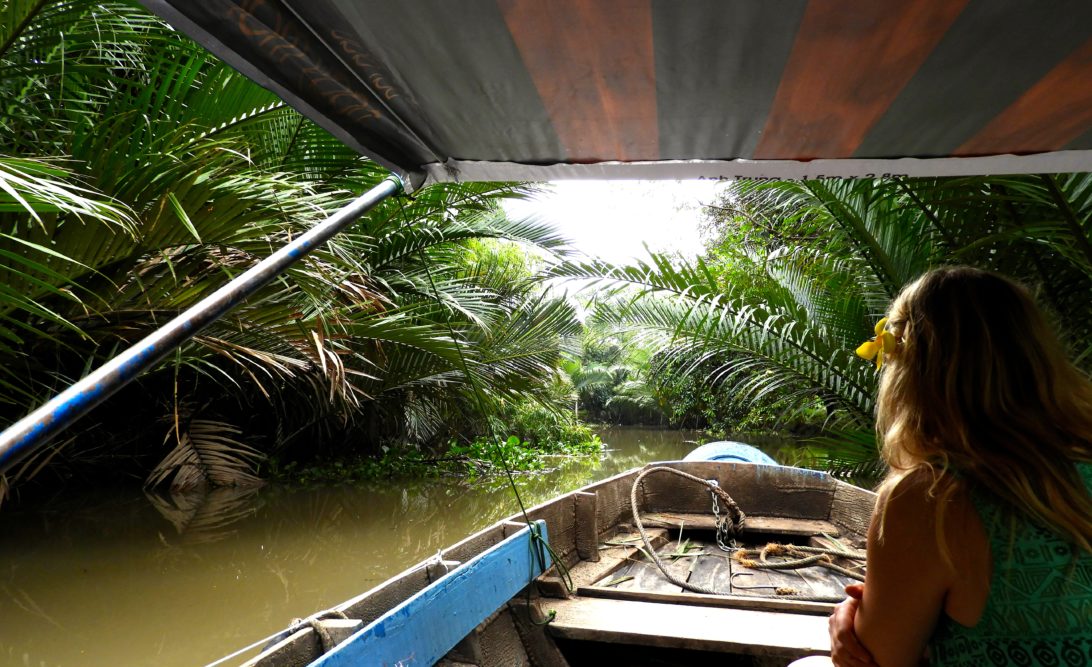 The Mekong Delta, that was part of the Khmer Empire for decades, is now the engine of the southern region of Vietnam. Its endless rivers, streams and canals create a lively world that is home to countless boats, water markets and ship-homes. It’s a huge idyllic landscape flourished with million shades of green.

Mekong river starting from its Tibetan source, leaving countless bends behind, flows into the sea at the southernmost point of Vietnam. This huge area, where thousands and thousand of small branches of the Mekong stretch towards the sea, exhaling life into the soil, offer humanity the world’s most abundant rice harvest.

Our alarm clock went off at 4.30 in the morning. We were quite tired as we arrived to the city of Can Tho the previous night after a long flight, taxi ride in Saigon and a 4 hour bus trip. 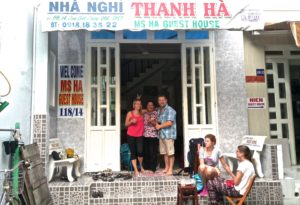 Of course we could have opted for an organized group trip (I would not like to describe here what kind of organized tours there are from Ho Chi Minh to Mekong’s floating markets), but hey, we are more like adventurers. And also we got a great tip for Can Tho to stay and where the lady of the house, Miss Ha organized our one-day private Mekong trip with a real Vietnamese veteran. I emailed Miss Ha a week before our trip to reserve a room and the tour.

Can Tho is a small town in the southern part of Vietnam, about 160 km southwest from Saigon. We arrived to the small city by bus. The bus station is on the outskirts of the city and there are free minibuses that take passengers to concrete addresses. You must sign up for the minibus at the station’s waiting room.

It was 5 am in the morning when we were meeting at the reception with our tour guide for the day. By then Miss Ha had 2 coffees and 2 bottles of waters prepared for us. Unfortunately, we woke up to a cloudy morning, it was raining the day and night before too and the forecast for the day didn’t look too well either.

We walked down to the river where our royal blue boat with our captain was waiting for us. We jumped in and headed south on the Can Tho river, which is one of the branches of the Mekong. After about 4 km’s of slow wobbles on the waves we arrived at the Cai Rang floating market, where life was already bustling in the early morning, and the players of the market were offering their goods from their huge boats. Lots of different items are sold here in some kind of a whole sale way. Some of the ships were packed so much with different fruits and veggies that they almost sank. 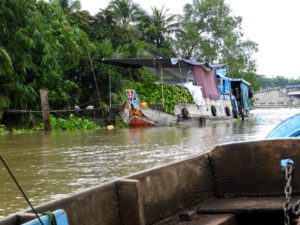 On each ship there is a long branch stretching towards the sky. At the end of the branch different vegetables and fruits are displayed – this way it’s indicated what it is there to buy from the ship. There are those who sell only one kind of vegetable / fruit, but there are those who have up to 7-8 different things. The supply is crazy, ranging from potatoes and carrots to mangoes and stinky dorians – there is to get all sorts of vegetables and fruits. These ships are not just floating booths, people also live on them.

After having been part of this floating market experience we drunk our morning coffee, and we headed to a more touristy place where we could also buy some things from the ladies in their small boats. We got some fresh, sweet pineapple and bananas, and also a delicious coconut drink. At this point the sky began to clear out and finally we felt the sunshine warming up our skins. 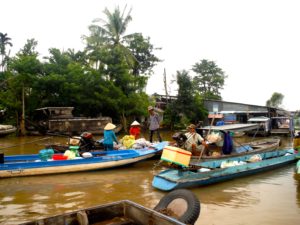 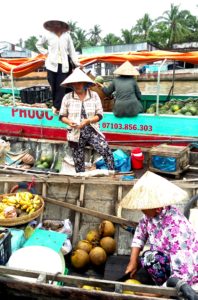 Our next stop was the small Sáu Hoài rice processing “factory” where rice noodles and rice papers are produced. The factory is located on the bank of one of the branches of the river. 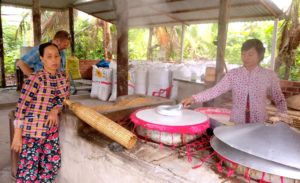 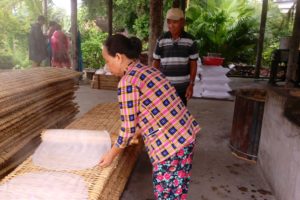 It was interesting to see how one of my favorite noodles are made. There’s nothing more in it than rice flour and some water. And of course fire and some tools are needed too. Sometimes they add tapioca or maize starch to improve the structure of the dough. The fresh dough will deteriorate quickly, so if it is intended for the shelves of the stores, the water from it has to be drained and the noodles have to be dried.

We bought a bag of fresh noodles just because. “We had a great time” making it, so we felt it was ours. Later we bought some sauce and ate it when we felt like. However after about a week unfortunately the noodles became inedible and had to be thrown out. What a waste!

We continued our tour on a canal. Its dense vegetation, which was truly flourishing in million shades of green, totally dazzled us. 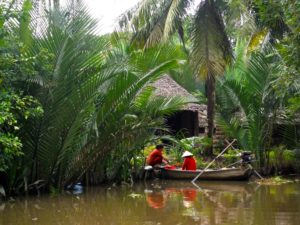 The huge leaves of coconut- and banana trees and other plants (unknown for me) were hanging over the greenish-brownish water, sometimes almost blocking our way. The experience was wildly romantic. When we got a gips through the vegetation, we could see endless areas of rice fields. 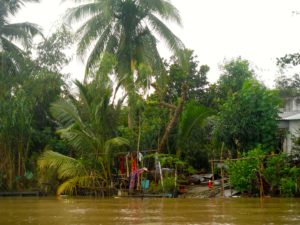 We endeavoured toward an anaconda farm. To one where these scaly reptiles are bred, but captured specimens may also be taken to. They process and sell their skin for profit in the leather industry and eat their flesh. At our arrival, two ladies were cleaning and shredding a snake on the river bank – it was a very nice welcome from them. Probably they were preparing for lunch – I could tell from the onion on the ground. 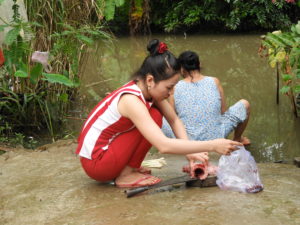 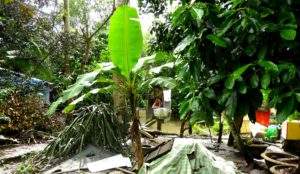 Because after visiting the snake farm the foreigners get hungry, they are taken for lunch to a very charming little place. It was definitely a restaurant for tourists, but it did not bother us as at that time we were the only people there. 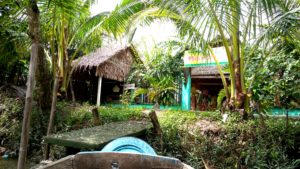 We went through the gate and walked along a path surrounded by fruit trees and scented flower-bushes on both sides, strolling us to the restaurant at the back of the garden. We walked around the beautiful little yard where a fishpond was located. Our guide talked us into having fish for lunch and because we love fish, we thought, okay, let’s taste some fish in local flavours. Well, we didn’t know what to expect, but definitely not what we saw.  The fish landed directly from the pond in the wok with hot oil in it. Exactly how I said it. They caught the fish from the pond, and without peeling it or even killing it, it was immersed straight in hot oil to roast. 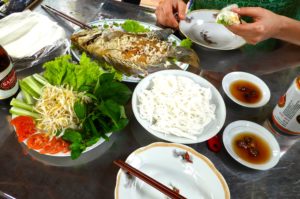 It was served in its full beauty, the fish scales when getting in contact with the hot oil curled up and were made into a solid, crunchy texture – apparently these roasted fish scales are a local delicacy that is safe to consume. On the side they served some greens, fresh vegetables (tomatoes, cucumbers, bean sprouts, salads and other greens, including mint). The fish’s meat, the vegetables and thin rice noodles were rolled into rice paper and consumed with soy sauce – this is the so-called summer roll (a version of the famous spring roll  but this is not fried). All the ingredients were super fresh, the vegetables were crisp, the fish was soft  with a bit of sweet taste to it. I have to say that overall we had a fantastic culinary experience!

After our lunch we headed back home through the canals, and our journey ended at the local Can Tho market. A real Asian market where everything is sold, even living frogs – not the ones meant for an aquarium, but for consumption. And I have to say we tasted some frog and it was delicious so no wonder that Vietnamese love frog meat so much! 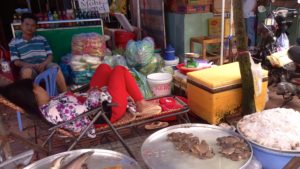 After a day full of wonderful but a bit tiring experiences we returned to Ho Chi Minh with Futabus. It was a super fast visit of the Mekong Delta, but it was worth every minute of it. And of course was worth its price too. The whole day tour costed only 25 USD / person. 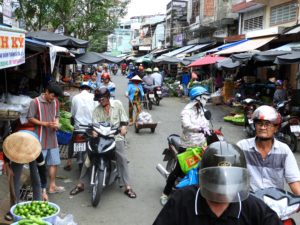