Taj Mahal – the wonder as I experienced it 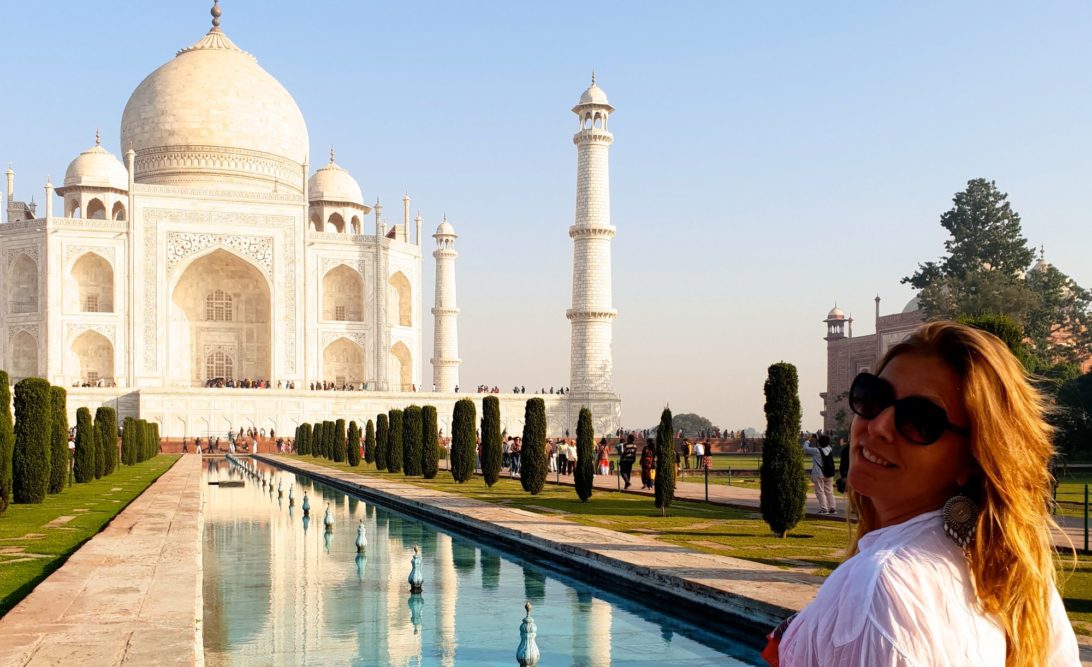 I clearly remember the moment when I was 18 years old and after my high school graduation at the dinner table I unwrapped the book with the title “The 100 Wonders of the World”. From its cover the picture of the Taj Mahal was shining back at me and at that moment I strongly felt that one time in my life I’ll have to see this wonderful building for real!

To be totally honest, I’ve been expecting a lot from the Taj Mahal. Maybe even too much. And I think it’s quite understandable, as for many many years it was just glowing at me from a book cover and inviting me for a visit every single time. Many times I’ve imagined the scene in my mind, that moment when I’ll have the very first glimpse of this magnificent building standing by the Yamuna river for almost 400 years, dressed in solid, white marble. The building that is the symbol of eternal love. I thought it was going to trigger my emotions enormously, even I was brave enough to expect some kind of a cathartic experience …

Clearly, from an architectural point of view it is a true masterpiece. The mausoleum is the jewel of the Muslim architecture in India and one of India’s greatest symbols.

The tomb was built in the 15th century. Shah Jahan, the Mughal ruler ordered it for his favorite wife, who died at the age of 39 while giving birth to her 14th child. Since then, no such great mausoleum has been raised to anyone in the world, so it is rightly included on the list of the seven new wonders of the world and it’s a UNESCO World Heritage site.

Obviously the character of the building tells a lot about the shah’s love for his beloved wife, which is why the Taj Mahal is the symbol of boundless, eternal love. The shah could watch the Taj Mahal from the terrace of one of the palaces of the Agra Fort and later he was placed to rest in peace next to his wife. 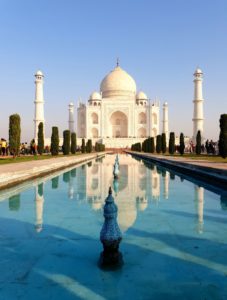 When at dawn, after 45 minutes of cueing I bursted through the Eastern gate of the Taj Mahal, I was beyond excited to catch the 1st sight of the huge, white, marble building.

I was thinking of how incomprehensible it is that somebody loved The Woman so much that he had saluted in front of her with the construction of such a masterpiece and let the whole world know about his love for her and the pain he felt because of he loss. Okay, obviously, the shah didn’t know that the Taj Mahal will remain in its original pageantry for the posterity, as it is super costly to maintain and protect it. Indeed, there was a time when some group wanted to demolish it and sell the marble pieces for good money, but thank God they did not find enough buyers for the marbles, so now we can enjoy this miracle.

When I was there, apart from the excitement and joy, there was another, more like a gloomy feeling inside of me. It’s well known that it took approximately 20 years to build the Taj Mahal and during these 2 decades more than 20.000 people worked around the clock on the project. Of course, hundreds of them have lost their lives over the years, and the legend says that the ruler cut off the hands of the workers so that they can not build such or not even a similar building. As I emphasized, this is probably just a legend, as there is no written evidence for that. But it’s pretty creepy even to imagine. This is not right, not even in the name of love! 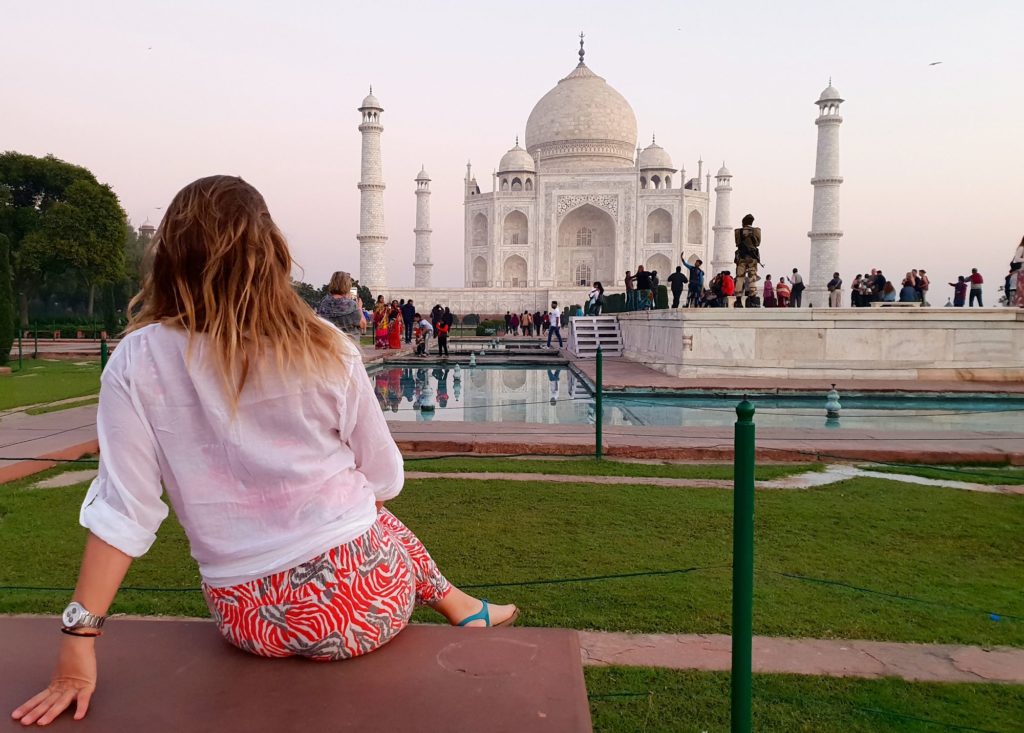 Anyways, at dawn, in the rays of the rising sun, looking at something that has been on my list for nearly two decades, is obviously an uplifting feeling. Honestly, I was tearing up a bit when I walked across the Great Gate and caught a glimpse of  the white marble building rising towards the sky. Obviously the tomb is grandiose, but it seemed a bit smaller in the distance than I’ve imagined. However, taking a closer look at Taj Mahal’s perfection, now I clearly understand why over 3 million people yearly want to take a look at it. Yes, 3 million people a year, which means more than 8,000 visitors a day. This is one of the reasons why it’s worth considering the time of the visit during the day. 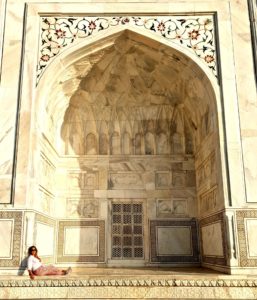 For me in India the sunrises were the zeniths of my day for several reasons. On one hand I felt my day being more rounded. On the other hand, early in the morning the smog is not that perceivable (seeing and smelling it). Taking these two factors into consideration and the rays of the rising sun, the morning lights were the most beautiful and most favorable ones for me. Also in the morning there are less people around the big attractions than during other parts of day. Well, in India the mass cannot be avoided anyways…

So… I visited the Taj Mahal in the morning and I think it was the best decision. It seems that only a few people are hit by the fact that if the sun rises on the East, the sunrise is the most delightful to watch from the West. Therefore from the mosque that is built from red sandstone and standing West from the Taj Mahal, for a few minutes I could sit quietly almost all by myself and watch the spectacular tomb in its magnificent, exalted splendor, until the first rays of the sun burst out from the corner of one of the four towers. 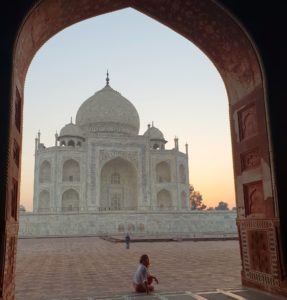 I did not reach the expected catharsis, but the few “lonely” minutes I could spend there with my own thoughts compensated me for everything. And I felt incredible gratitude in my heart for being a little part of this wonder for a moment! 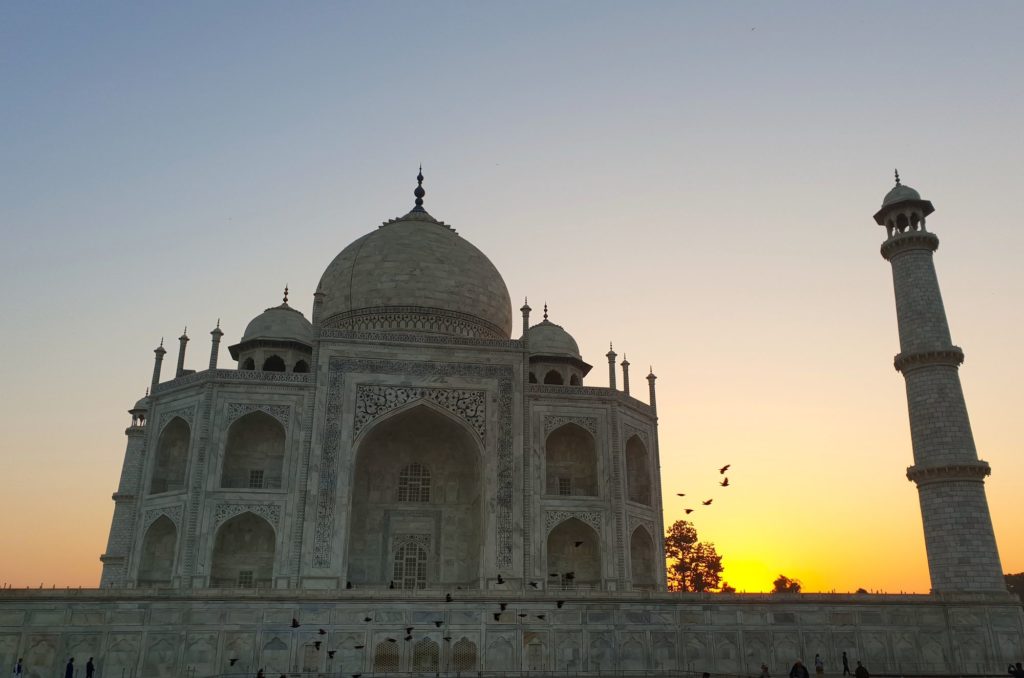