Preikestolen – the Pulpit-Rock from Stavanger 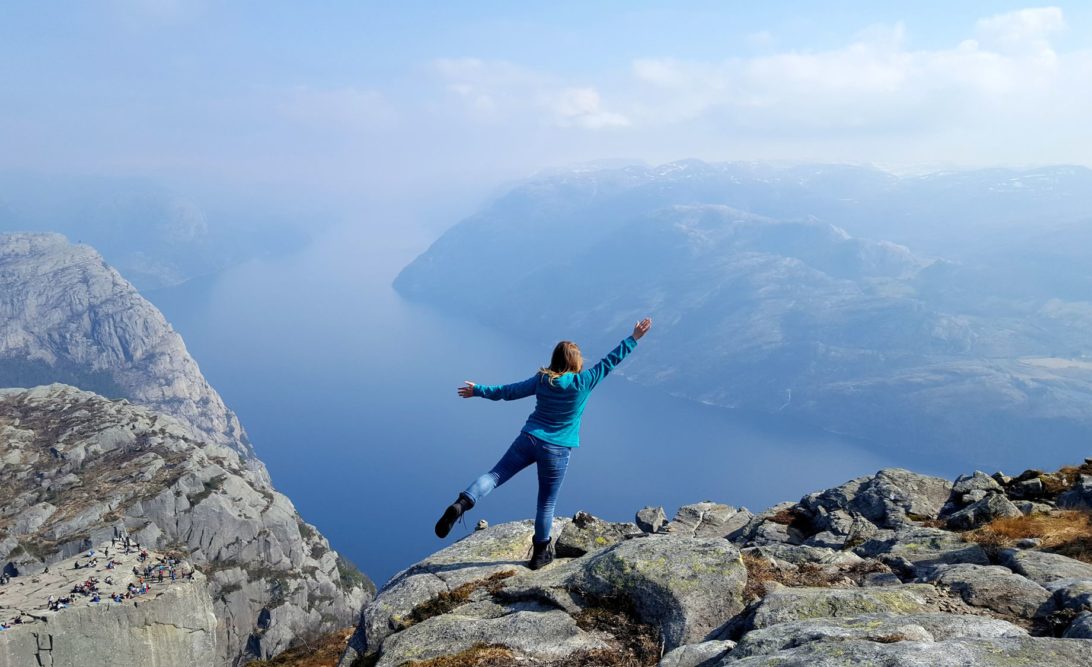 Preikestolen, or in English the Pulpit-Rock is one of the most popular sights in the south of Norway.  For a long time I just watched the photos of it and I longed for conquering it. Then my father turned 60 years old and the family decided to go to Norway for the surprise long weekend. So I also got a wonderful opportunity to get to know this rock firsthand.

When to visit Preikestolen

The high season for hiking starts in April and ends in October. In this period it’s pretty easy to get to the starting point of the hike and then climb to the top. The disadvantage of this time period, and especially the summer season, is the large number of tourists.

We planned the trip for the first weekend of April, risking that there will be some rain and wind, which would have been quite annoying. But we were so lucky that during the short 4 days that we spent in the Stavanger area the sun was brightly shining at us. This, however, inspired many on the beautiful sunny Sunday to climb up the rocky hills. 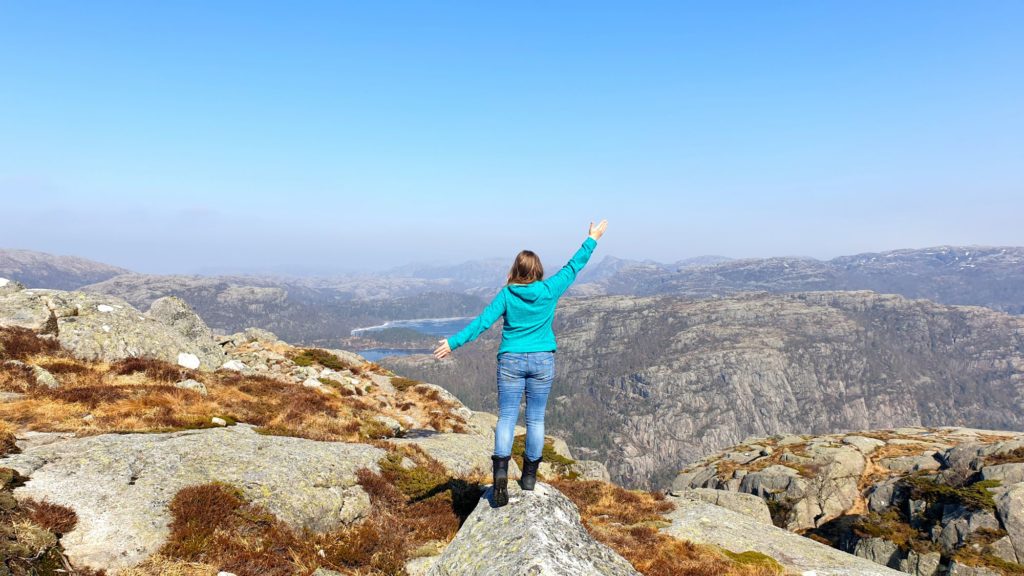 Winter can be even more unpredictable than the beginning of April, for example, as a sudden blizzard can start off. If it’s still open, you can of course hike only at your own risk, but it’s still not easy to get to the starting point of the hike because there are no buses operating, so the car rental or taxi (quite expensive) remains as an option. However, there are also situations when the hiking trail is completely closed because it is life-threatening to climb on the icy rocks. If hiking is allowed on the ice in winter, it may be necessary to use the ice grips (can be rented in the parking lot). 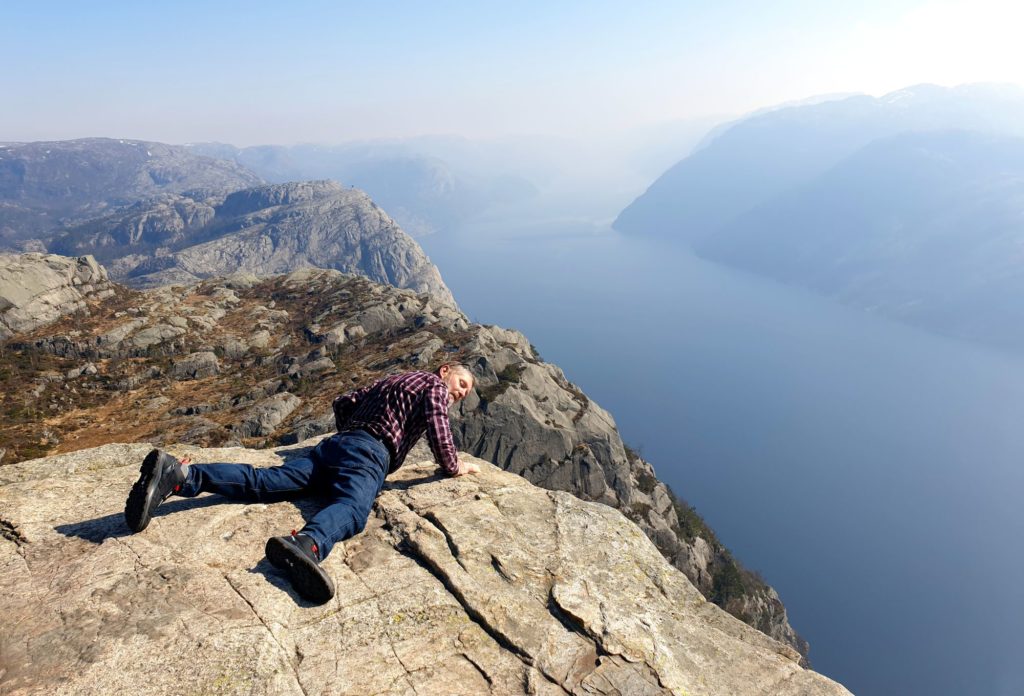 How to get to the Pulpit Rock?

The hike itself to one of the best known and most “trendy” rocks in Europe today starts from the Preikestolen parking lot. This can be reached in several ways.

In case more people are traveling together (we figured that even from 2), the most profitable way is to rent a car and drive up to the parking lot Preikestolen. In addition, there are times (approximately from November to March) when there are no buses running from Tau (that’s the starting point of the buses, and to be reach from Stavanger by ferry), the only way is to drive or take a taxi. The price of the taxi is pretty tight (around 100 EUR roundtrip). In addition, you will be much more mobile by car, so you can also visit places in the area that you would not otherwise reach, or it would be quite difficult to go to.

We rented our vehicle on autoerope.eu. The reason of my choice was that they’re German based, therefor I found them trustworthy. At the end we weren’t disappointed. Basically I reserved a car in the “economy manual” category, but compared to that a new, full automatic Nissan Quashkai was waiting for us in the airport parking lot of Sixt. My jaw also dropped when the Sixt employee at the counter told me that the deposit for the car will only be 2000 NOK (about 205 EUR) and not because I paid for full cover, but because there is casco anyway on the entire fleet (on every rental car there is!) and why would they shi•t on their clients.  In addition I did not need to have a credit card for the deposit, and embossed debit card did the job (of course, it should have the right amount on it).

In Norway, apparently, the tolls for using the roads are pretty high. The airport can only be reached by a toll road. We tried to avoid the tool roads as much as possible, even though we had a longer journey time but some amazing sites! However not only the highways are charged, also some other roads, mostly around and in cities – I’ve realised this only way later.

The rental cars are equipped by a  chip that reads the toll gates that are crossed. Sixt has charged a 45 NOK/day (4,60 EUR) for this AutoPass chip.

At certain times (07:00 – 08:59 and 15:00 – 16:59) prices are twice as high as during the normal period.The rental company deducts the price of the fees from the deposit as they receive the invoice from the operator of the roads on the basis of the registration number 5 days after usage.

UPDATE: After we arrived home, when I got the receipt for the toll and was charged from my deposit, I was somewhat surprised! Without any detail, 300 NOK (30 EUR) was charged for the 3 days, which I honestly considered a slight exaggeration, even though I know that Norway is expensive. So I asked for detailed information about when and where we passed the checkpoints. After a few e-mails I received a screen shot of the original document but the prices were not shown on it, I asked I requested that too. They said they didn’t have them… Of course, what a joke, like I was born yesterday… In addition, one passing, that was clearly not ours, was charged too. How could have we passed when we were already inside the airport terminal at that time?

At a price of 50 NOK / day a second driver could be added to the rental – we took this option and the amount was deducted from the deposit.

There are more ferries to Tau from Stavanger every day, from where we you can continue the drive to Preikestolen’s car park. The Stavanger area is divided into zones when it comes to ferry fares and, because Tau belongs to zone 16, the following prices apply: 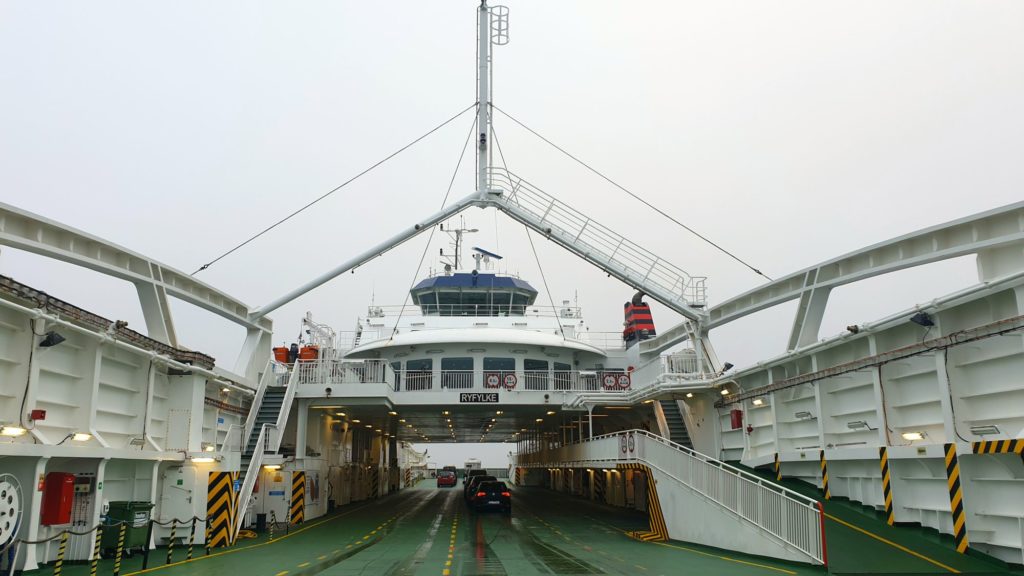 You can also reach Preikestolen the south, from Lauvvik, where you have to take the ferry to Oanes. Here the prices are much more favorable, but you have to drive more from Stavanger, The scenery is absolutely beautiful though. We use this route the other way around, from Oanes to Lauvvik, to go visit the Manafossen waterfall, but it was too late already, so we changed our minds and drove home and left decided to make the trip the next day. The prices here should be calculated using zone 3 rates:

•Passenger car with a driver: 84 NOK

•Motorbike with a driver: 60 NOK

The ferries’ routes and pricing is available on the website of the operator, Norled.

For parking you will be charged NOK 200 per car, which I think is an incredibly high price. But what do we expect from one of the most expensive countries in the world? Parking can be paid either by card or with cash at the barrier, but the machine only accepts coins. We were able to change notes to coins in the hotel next to the parking lot.

In the main season coaches depart from Tau, so you only have to get from Stavenger to the north by ferry. From the ferry terminal in Tau there are tourist buses operating to the parking lot.

The combined ferry+bus ticket price is 360 NOK (37 EUR) roundtrip and you can get it online.

From Tau there is another company that launches several daily routes to the parking lot. With them a roundtrip ticket costs 200 NOK (21 EUR) so if we add to this the ferry fare, we are paying still 324 NOK (33 EUR)

During the winter season, as it is not always recommended to visit the Pulpit Rock, buses do not run at all. In this case the taxi remains the only option if you don’t have a car. The few kilometers by taxi 2-ways will cost you around 100 EUR from Tau. Tau can be reached by ferry from Stavanger at the above prices (valid from 01.01.2019).

Organized tours to the Pulpit Rock

Several companies organize guided tours which usually start from Stavanger. We weren’t part of one of these, but there was a larger group that we came across several times on our way up. There was a couple in the group we talked to and they said that they paid around 125 EUR for the 10-hour program, including the journey from Stavanger.

However we calculated, in total for 4 people (but even for 2!) car rental paid off the most for the 3 full days of visit, specially because we could cruise around the area and just be amazed watching the breathtaking sights! 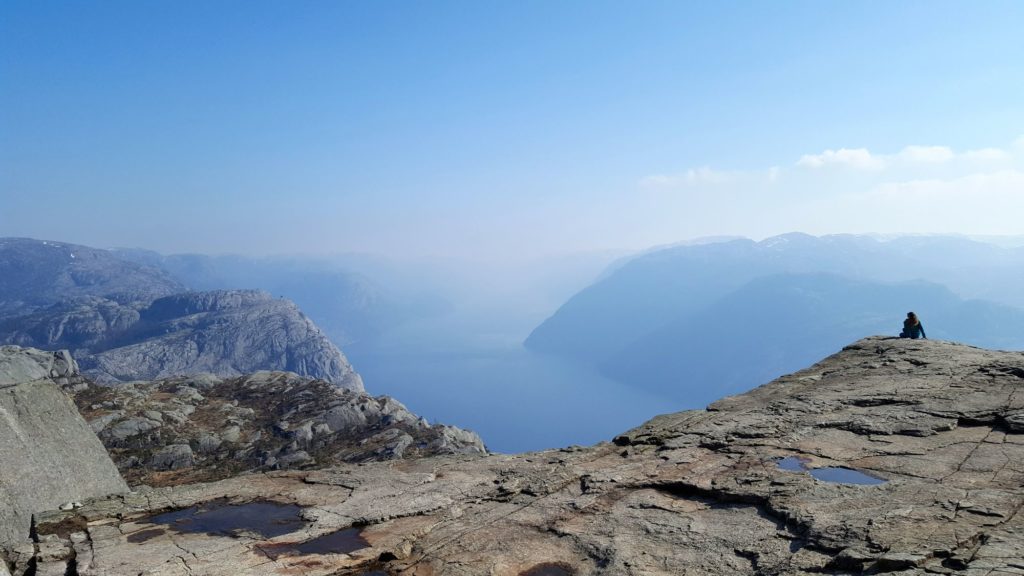 The hike to the Pulpit Rock

The hike itself starts from the Preikestolen parking lot, that we reached by car. In the early morning, when we arrived at the ferry dock in Stavanger, I was a bit in panic, because there was such fog that we could barely reach 20 meters of sight. 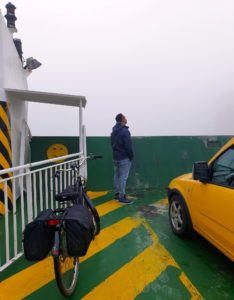 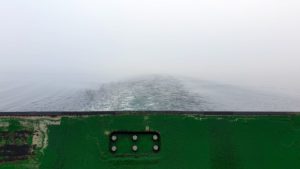 But as we were driving up to the parking lot, with the elevation we started leaving the fog and clouds behind and soon we felt the warm rays of the morning sun and, together with that, the hope for a wonderful and sunny hike. 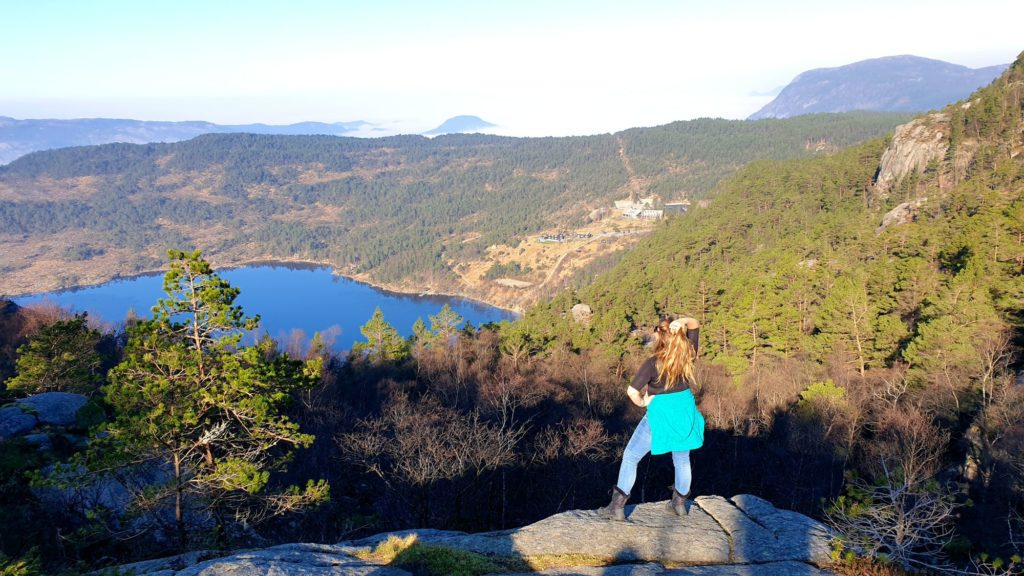 We started the hike around 9 in the morning and we noticed that if we started an hour later, we would have bumped into much more people on our way. So I think it’s really worth getting up early. Next time I would sure go for sunrise, the sight of the morning rays of the sun must be incredibly majestic. There were some people on the top who made it up early and could admire the rising sun and… I was a bit jealous of them. Also I think that the sunset is magical too but I’d rather watch the sunrise for some reason. Och, and there was a local couple who spent the night in a tent all the way on the top for. Well, that must be a special experience for a lifetime! 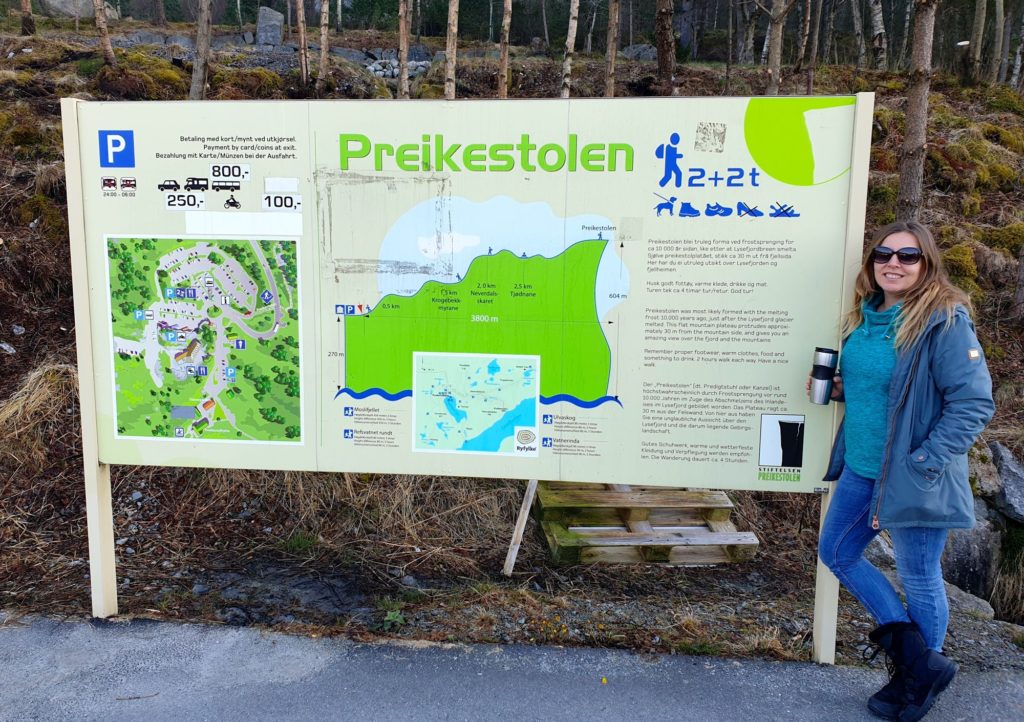 The hiking trail is marked with red T and white reflective columns. 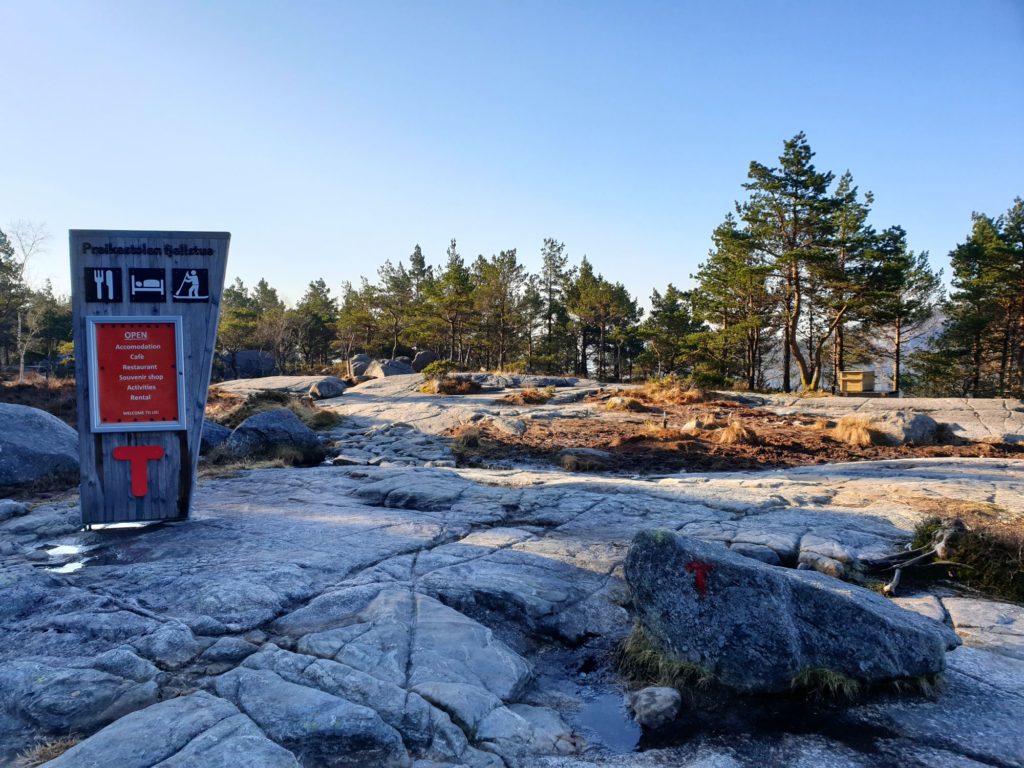 It is not an overly hard hike, but I think those who are not used at least to some physical exercise should pull their socks up. In most places you have to balance upwards on huge stones (and of course on the way back down too), there are many steeper sections, but there are more pleasant, flat ones among them too. 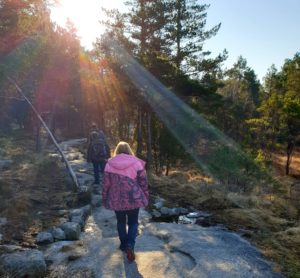 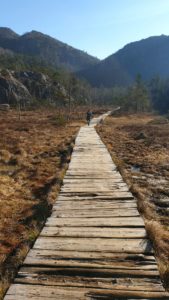 My 61-year-old father and my few years younger mother (who additionally has some knee problems) have been smooth with their hike, though they’re pretty fit and sporty. 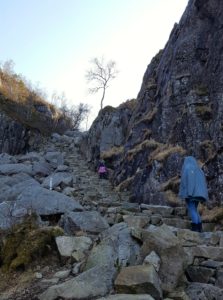 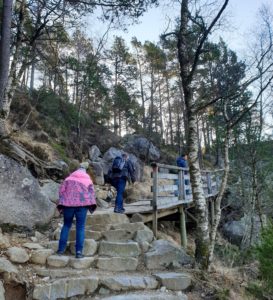 The length of the way is 4 km per direction and it took us 2.5 hours to reach the Pulpit Rock. But we stopped many times on the way to have breakfast and take a lot of pictures. 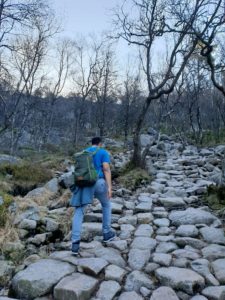 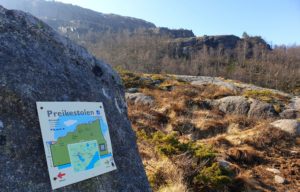 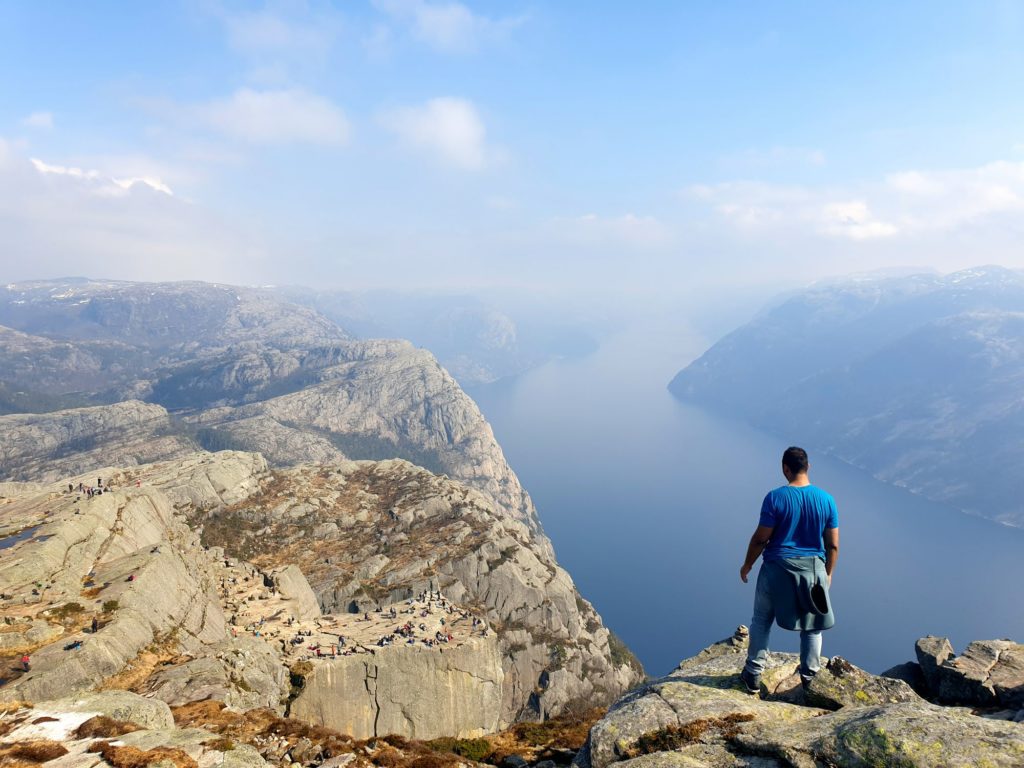 TIP: the more daring ones can climb over the rock above the Pulpit Rock. We hiked all the way to the top, which added around 2 extra hours to the complete hike, but it was the best decision we’ve made, as the view of the huge rock (full of people at that time) and the spectacular fjord 600 meters below the pulpit and the surrounding cliffs, was even more amazing. 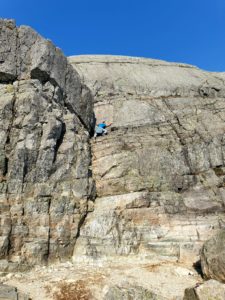 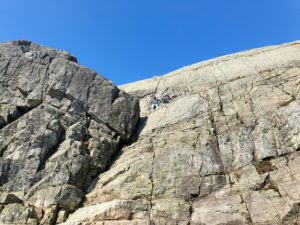 What to pay attention to during the hike? 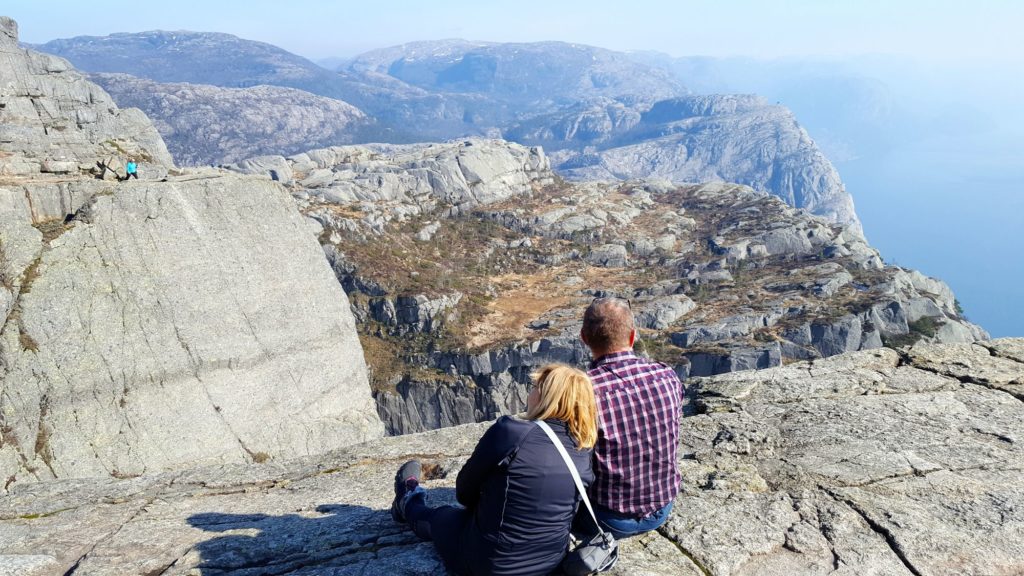